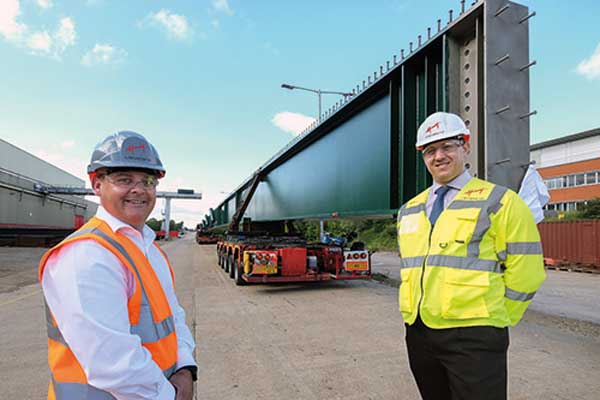 Steelwork contractor Cleveland Bridge has broken their own company record and fabricated a pair of 56m-long girders for a new bridge spanning the A45 in Coventry.

Previously, the company’s record for its longest girders was 50m, set in 2017 for the Aberdeen Western Peripheral Route project.

Cleveland Bridge has been contracted to supply, fabricate and erect the bridge, which features a double-span ladder deck and a striking mast.

The bridge components, including the girders, have been fabricated at the company’s production facility in Darlington, County Durham.

Following fabrication of the girders, Cleveland Bridge engineers undertook a complex delivery programme. Once loaded on to the trailers, the girders were carried as part of a convoy of two vehicles, each measuring more than 60m-long, on their 180-mile journey to the bridge construction site. The bridge will subsequently be installed in March 2020.

Chris Droogan, Managing Director of Cleveland Bridge, said: “The fabrication of these bridge girders is testament to the skills of our workforce and our extensive production capabilities. It is always a proud moment when a project is loaded out for installation, but when it breaks a previous company record it’s particularly satisfying.

“It is also a major achievement to transport a load of this size and navigating the route across the country demonstrating the ability of our team and contractors to deliver a successful operation.”