Up and running at Aintree 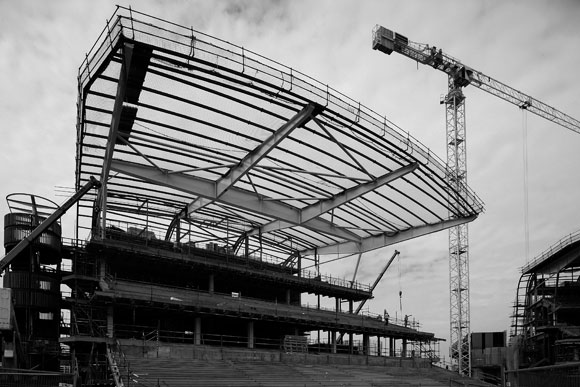 Each stand is topped by a huge 18m cantilever roof (Photos: David Barbour/BDP)

This year’s meeting – held from April 12-14 – benefited from the completion of a £35M redevelopment programme which has a stunning new grandstand as its centrepiece.

The overall redevelopment work was split into two phases to accommodate last year’s Grand National. No cancellation of this hallowed event was permitted, so the project team initially came on site in 2005 and wrapped up phase one before the 2006 event. They then came back to do phase two and finished this stage in time for April’s meeting.

Phase one of the project included a new weighing room, parade ring, stables, pre-parade ring, a steel-framed media centre and a pavilion. In order to maximise the tight timescales the first phase of work also included groundworks and piling for the new grandstand’s foundations.

Peter Riley, Project Manager for Watson Steel, says his company supplied holding down bolts which were cast into the pile caps and these were then covered over to allow temporary structures to be erected for the 2006 event. Once last year’s race meeting was over and the temporary buildings dismantled, the steelwork erection was able to begin immediately.

“This saved us a couple months of work as all the preparatory work was done and steel columns could be erected on to the bolts as soon as we came back on site last May,” explains Mr Riley.

The new Aintree grandstand, which is without doubt the crowning glory of the redevelopment programme, is in fact two identical mirrored structures linked by a central pavilion that includes bar areas. 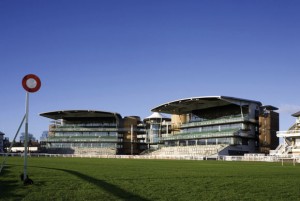 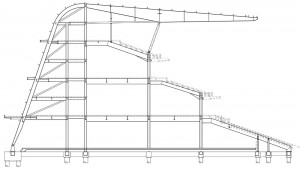 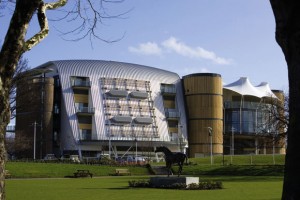 Rear view of the grandstands 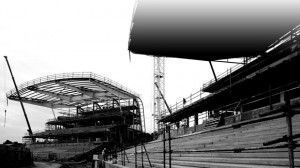 Built adjacent to the existing Queen Mother Stand, the new structures, called the Lord Sefton Stand and the Earl of Derby Stand respectively, are located on a bend in the course close to the finishing post.

Both stands provide three tiers of premium viewing facilities. A ground floor terrace can hold 1,400 punters, while above this there are two levels of seating. Each floor also contains numerous eating and drinking outlets, betting facilities and hospitality suites.

In total, the grandstand has added an additional viewing gallery for 2,800 race-goers on steppings at ground level, seating for another 1,580 punters, plus 32 disabled spaces and permanent corporate hospitality facilities for 2,288.

Joining the two grandstands is a concrete toblerone-shaped pavilion named the ‘Saddle Bar’ containing a bar, lifts and stairs. The ground floor of this three level structure features a tunnel to allow horses access to and from the parade ring situated to the rear.

The steel bridge structures were fully assembled and concrete decked at Watson’s Bolton facility and delivered to site as complete units. They were then individually lifted into position towards the end of the construction programme.

A major feature of both grandstands are the large feature 18m cantilever roofs which required some intricate design work to accommodate their complicated geometry and haunch.

Building Design Partnership’s (BDP) Project Engineer, Phil Simcock, says the roof required some complex modelling as each grandstand splays out from back to front and is curved along its central axis.

“The original vision and design for the stands was a jockey’s cap,” explains Mr Simcock. “Viewed from the side this becomes evident and the cantilever roof represents the cap’s peak.”

The roofs were erected almost simultaneously and both feature a large 34m-long, 2.2m deep transfer girder which sits horizontally across the stand. This large member is supported by perimeter raking columns and is situated far enough back on the roof’s plan so as not to hinder any sight lines.

The transfer girder also incorporates a curved top flange to accept the roof top purlins and also supports the four cantilevered plate girders below, each 29m-long in total and up to 2m deep.

Mr Simcock says: “The roof went through a number of design changes early on. But a cantilevering roof was plumped for as it was the most cost effective and architecturally accepted design solution. Because roofs are an extremely prominent feature it was also decided that the steelwork would be exposed.”

Below the roof structure the grandstands have been erected with a 10m x 10.5m grid pattern with six lines on the ground level. Because the structure steps back as it rises, every floor has one less grid line.

“Vibration issues due to dynamic crowd loading also played an important role in the design of the stands,” says Mr Simcock. “Both vertical and horizontal natural frequencies were required to be modelled and assesed, while the internal hospitality areas have been designed to accommodate events such as dances, which create synchronised dynamic crowd loading.”

Another challenging aspect for the team was associated with the two seating terraces. Both have pre-cast concrete decks and these slabs overhang the supporting steelwork to form balcony areas at the front of both terraces.

“We had to design some very heavy connections to fasten back the concrete onto steel plates,” says Mr Riley.

“There were some huge torsional forces and the balconies were held back with a combination of steel stubs and Macalloy rods,” adds Mr Simcock.

On the finished project, BDP Project Architect Richard Elsdon sums up: “Our design provides race-goers with state-of-the-art facilities which will enhance the strong traditions of this famous racecourse and provide a world class setting for a world class event.”