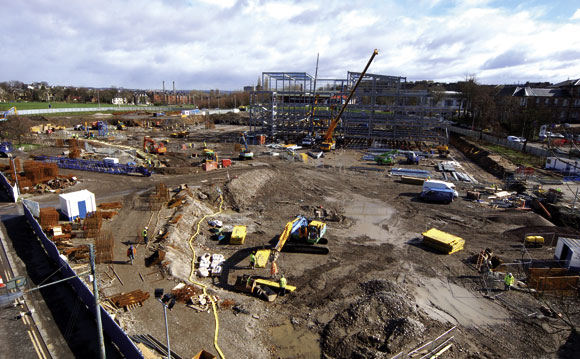 The close proximity of housing led to steel being used

A tight construction programme and the need to minimise disruption to the local community led to the decision to use steel for a new hospital in Glasgow. Martin Cooper reports.

Construction at the Victoria Hospital site commenced early last year and completion is set for 2009. The new 41,500m² hospital, which is situated on former playing fields opposite the existing Victoria Infirmary, will consist of three functioning levels on top of a covered car park.

Project architect HLM says the overall design is the result of extensive site analysis and based on the concept of creating a ‘hospital in the park’ which maximises the creation of a high amenity therapeutic environment for patients and staff in a mature landscaped setting.

This desire for a relatively peaceful setting also influenced the need to keep construction activity in general to a minimum, bearing in mind the close proximity to an existing hospital.

Stephen Muir Project Director for Balfour Beatty Construction, says the surrounding residential properties as well as the Victoria Infirmary led to the decision that the new hospital and energy centre would both be steel-framed.

“We were following our ‘good neighbour’ policy, which is an important scheme at Balfour Beatty,” explains Mr Muir. “With steel there is always less impact on the surrounding area, such as less noise and dirt, and fewer truck movements.” 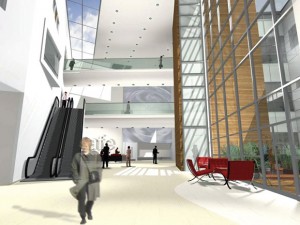 The central atrium has two bridges at second and third levels 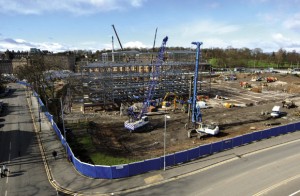 A sequential programme has meant earthmoving, piling and steel erection takes place at the same time

Balfour Beatty wants to keep deliveries to a minimum as the site is surrounded by busy south Glasgow roads. Using concrete on a project of this size would have meant materials turning up on site nearly every hour.

“Steel also lends itself to off-site fabrication and a relatively short erection period compared to other materials, which reduced pressure on our extremely tight construction programme and meant on average only two steel deliveries a day,” adds Mr Muir, who is a self-confessed fan of steel construction.

To emphasis just how tight the construction programme is Mr Muir adds: “The 124 week programme to deliver a £100M project is a challenging one.”

Steelwork erection commenced on 26 February this year, seven weeks ahead of the construction programme. Prior to this, Balfour Beatty had undertaken some major preparatory works which included leveling a sloping site by removing 63,000m³ of overburden.

An extensive piling operation also took place with 386 bored piles, each with a pile cap, being installed to accept steel columns.

The works followed a sequential pattern around the site from east to west and then south. The piling programme followed on behind the earthmoving and once an area had been leveled and piled, steelwork contractor Severfield-Reeve was able to begin erection.

Steve Swift Project Manager for Severfield-Reeve, says the project basically follows a 7.8m x 7.8m grid pattern where possible, although as the building is far from square, there are a number of deviations.

The feature element of the project is a 160m-long sweeping crescent facing in a south westerly direction. The facade contains the hospital’s main entrance and an attached 800m² open atrium.

“The connections throughout the structure are different and bespoke, especially along the crescent facade,” says Mr Swift. “Along this facade they generally have a shallower geometry because of the angle for the supporting beams.”

But in general, Mr Swift says even the connections and the shape of the feature facade weren’t that challenging for a modern day design office. “In the days before CAD it may have been more of a challenge,” he concedes.

Severfield also erected two steel bridges that span the central atrium at the second and third levels. “We also installed a large amount of feature steelwork around the perimeter of the atrium to accept the glazing,” adds Mr Swift.

The entire hospital building contains a total of six open atriums extending upwards from the ground level and these were designed to allow natural daylight to penetrate into the inner wards of the building.

Structural engineers for the project Faber Maunsell, says the pre-construction design was particularly challenging. The design co-ordination of such a highly serviced building with many rooms, some of which will house specialist equipment, such as MRI scanners, has taken a high degree of skill and effort, on the part of all those involved.

Vibration could have been an issue and the scanners posed another challenge, due to their operational sensitivities. Faber Maunsell and Severfield-Reeve’s diligence produced a design that incorporates all of the Health Board’s specifications.

The hospital entrance is part of a 160m-long crescent facade