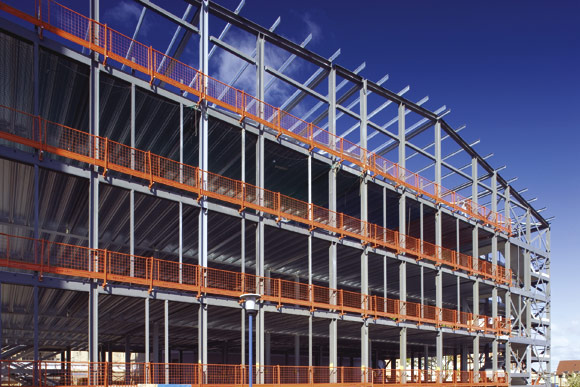 Healthcare for residents of the Sunderland area is receiving a boost in the shape of an extension to the city’s Royal Hospital, where steel is reducing construction time and helping produce ultra-clean operating environments.

A new extension to Sunderland Royal Hospital’s operating theatre wing is rapidly taking shape. When complete it will provide a range of new clinical facilities for day care patients.

The 15,000m², £8.5M five-storey Block C extension’s second and third floors will house three general operating theatres and two ultra-clean theatres, with day wards and recovery suites above that. The top floor will house plant. Sterilising services including washers, disinfectors and autoclaves for operating theatre instruments will be sited on the first floor. All of these will be accessed from the existing building, and in addition there will be a mortuary with its own separate entrance on the ground floor.

Steel was chosen in part to match to the existing building: the new construction connects to a smaller extension dating from the late 1990s which is also steel-framed.

There were a number of other factors in steel’s favour. Kier Northern Project Manager Nigel Moore says: “A steel frame is a lot quicker in programme terms. From an environment point of view, building an insitu frame would have meant many more wagon movements and congestion around the hospital.” This is especially important given that the site is constricted. 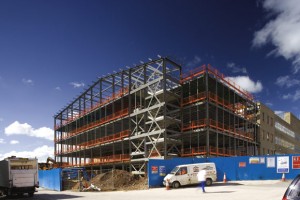 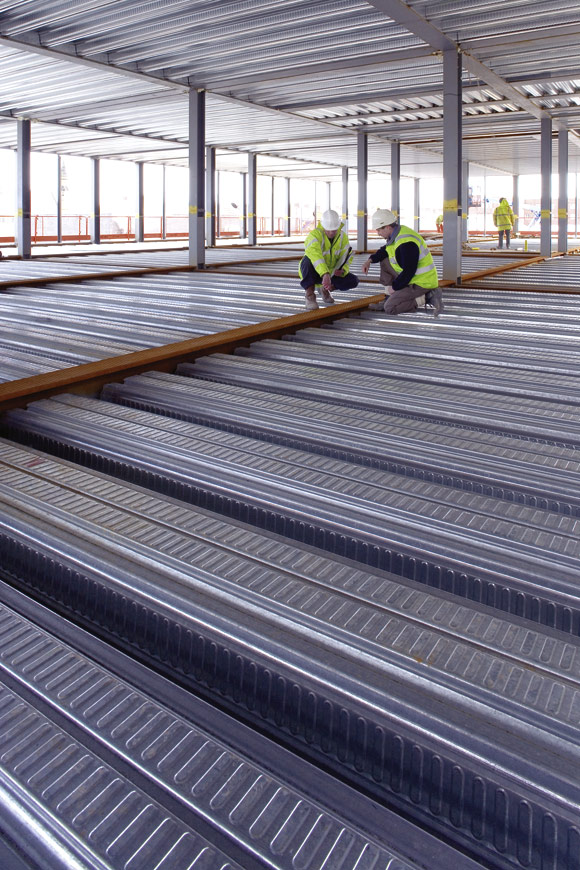 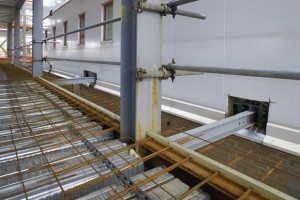 In addition, from the standpoint of limiting vibration in the existing hospital, a steel frame had the advantage that it could be built initially as an independent structure and connected later. Similarly, erection of a garage unit is being delayed till later in the programme, until after the brickwork façade of the main building has been completed.

Initial design of the new extension was carried out by the client’s in-house design section. To use the expertise of the main contractor and subcontractors the scheme was let to Kier as a disgn and build contract. Kier employed Arup to act as structural engineer. South Durham Structures is responsible for steelwork fabrication, and erection of the steel frame and decking.

The structure is built on a varying grid of 8.0m in one direction, up to 6m in the opposite direction Columns are 254 UCs spliced 1500mm above second floor level. For the floors 225mm deep Slimdek units are used. The 300mm deep x 185kg/m asymmetrical beams are substantial sections with 30mm flanges and 30mm webs. Flat cross-bracing in the stair cores provides lateral stability.

Use of Slimdek means that no fire protection to the beams is needed, as they are cast into the structural topping. Only their lower flanges are left exposed but it is not necessary to protect these to achieve a one-hour fire rating. Columns will be enclosed in plasterboard.

“We were really pushing the spans so there’s a need for some propping,” says Arup Project Engineer Svend Trinder. Arup investigated a number of strategies to avoid this, such as two-stage pour, initially pouring concrete to the depth of the Slimdek ribs and then adding the rest of the structural topping later.

“We tried extremely hard to push back the frontiers, working with Corus to try to avoid propping. We almost got there but it was not quite possible.”

In the end there was not enough experimental data to be sure that the flooring system would perform as expected under these unusual conditions, says Mr Trinder, and he suggests that a research project could usefully look into this question.

The drawback is that propping slows the programme somewhat. Each floor has to be propped via the floor below down to ground level, which means that concrete on any given floor has to achieve its 28-day strength before the floor above can be cast.

The construction team looked at options such as adding an accelerator to the mix, before deciding to increase the concrete grade from 35 to 40, so that the nominal 28-day strength will be reached more quickly.

As with all hospital buildings, noise and vibration have had to be taken into account both in design and construction of the building. “In the operating theatre the floor slabs are thicker than elsewhere, primarily to take the weight of operating theatre equipment,” says Mr Moore. “As a secondary function this also reduces vibration.”

But noise and vibration is more of an issue than normal in the construction process, because, as South Durham Structures Contract Manager Derreck Pinkney points out, “There are live operating theatres three metres from where we’re working.”

SDS started work at the end of February, but though 90% of the steelwork is now complete, the most challenging aspect of the contract still remains.

The new extension has initially been built as a separate, independent structure, so vibration during this phase was not too serious a problem. “The more difficult question is connecting to the existing building, when any vibration will go straight through,” says Mr Pinkney.

A total of 33 linking steel beams have to be attached in conjuction with the removal of existing cladding and demolition of the blockwork. This is not due to start until late July, after the floors have been completed.

The contractors have been informed of downtime slots when the operating theatres will be undergoing cleaning or maintenance, though these slots are only 45 minutes to an hour long. A hot line has been set up from the hospital so that work can be stopped if it threatens to affect an operation. Some of the work such as the demolition of the existing wall will take place overnight.

The majority of the steel connecting beams at first floor level have already been installed. An external flashing was removed to reveal the existing hollow section beams. Fin plates were welded to the existing beams and the connecting members bolted in place.

Access is limited, with only 2.2m between the old and new buildings. Mr Pinkney plans to deal with each floor on a progressive basis, using a scissor lift to install the linking beams to the next level.

The other outstanding task for South Durham Structures is to build the two-storey plant unit, after the main façade brickwork is complete. “This means we can build the façade from mast climbers rather than having to scaffold the building,” says Mr Moore.

The new extension is due to open in April 2006, providing a welcome boost to the city’s healthcare facilities.