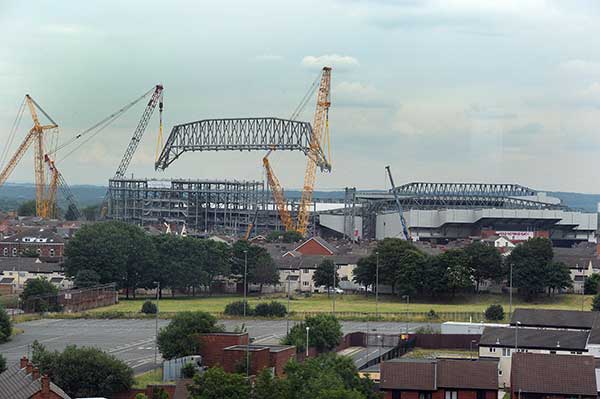 Forming an integral part of the redevelopment of Liverpool FC’s Anfield stadium, the 650t steel roof truss for the new main stand has been lifted into place.

Having been delayed for one day due to high winds, work started just after 9am, when the 140m long structure was lifted up above the stand by two of the largest cranes in the country.

Within an hour of the work starting the truss was moved over the incomplete steel frame for the new main stand.

It then stayed hovering between the new and old sections of the stand for about two hours while more weights were added to the cranes to allow them to safely lower it into position.

The structure was then lowered onto two new towers, either side of the stand, and fixed into place. Work then took place to secure the truss and release it from the cranes.

The work was the latest development in the stadium’s expansion, and is set to make the main stand one of the largest all-seater single stands in Europe’s top divisions.

The redeveloped stand, on target for completion during the 2016/17 season, will comprise three tiers with the existing lower tier featuring a widened player tunnel, new team benches, a media platform and wheelchair viewing positions.

The redevelopment plans will add around 8,500 seats and take the Main Stand capacity to over 20,000, increasing the overall capacity of Anfield to around 54,000.

Working on behalf of main contractor Carillion, steelwork for the project is being fabricated, supplied and erected by Severfield.