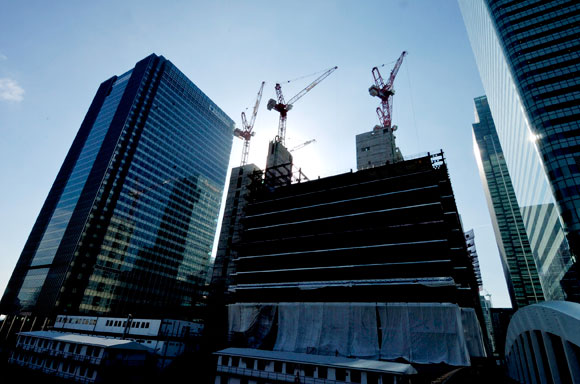 Rising up on a plot between the Barclays and HSBC towers the two blocks share a four-level basement.

The high-rise skyline of the Isle of Dogs will shortly be augmented by two more steel framed office blocks which have replaced an earlier design for one large structure. Martin Cooper reports from Canary Wharf.

Construction in London’s Docklands has been relentless over the last twenty years or so. Beginning with the construction of the iconic Canary Wharf tower in the late 1980s, multi-storey buildings have sprung up on a regular basis transforming the landscape east of Tower Bridge. 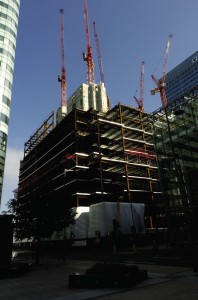 Each of the project’s cores support a tower crane.

One of the latest developments, taking shape within Canary Wharf, are two 16-storey office blocks provisionally known as DS3 East and West. Rising up on a plot between the Barclays and HSBC towers, DS3 West will top out this month (November) and DS3 East during the early part of January 2008. Steelwork contractor Cleveland Bridge started on site this summer and will eventually erect 8,000t of structural steel, 3,500t for the East tower and 4,500t for the slightly larger West tower.

Although both towers are not connected above ground level, they do share a concrete sub-structure and slab, which incorporates a shared four level basement. Both towers have concrete cores (three in West and two in East tower) providing structural stability and from ground floor up the entire project is steel-framed.

The foundation work and the concrete sub- structure were both completed in 2003 when the plan was for a single structure. However this design was eventually shelved and the site then lay dormant for a couple of years before the present scheme with two towers was given the go-ahead. Constructing two separate towers on the site instead of one large structure meant some major modifications to the concrete sub-structure had to be done prior to steelwork erection beginning.

“As there are now two buildings the column lines above ground didn’t necessarily match those below ground so new concrete basement columns were added, while some areas had to be demolished to provide new service and mechanical openings,” explains Sam Wong, WSP Project Director.

The original design envisaged one structure covering the entire site’s footprint, but the new scheme includes a large central courtyard area taking up nearly a third of the site.

“The site’s footprint is about 60:40 in favour of the West building,” explains Keith Page, Project Manager for Canary Wharf Contractors. “The courtyard essentially separates the two towers along the Canada Square frontage, with West tower’s L-shape taking up a rear portion behind the courtyard.” 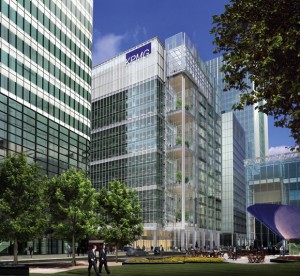 The towers will be the latest addition to the gleaming glass-fronted structures of London’s Canary Wharf.

“Since starting we’ve have managed to complete one floor a week, and once both towers kicked-in we increased our workforce to keep this programme on schedule,” he explains.

Prior to steel erection beginning Cleveland Bridge first had to install the steel staircases into the five cores. These were lifted by tower crane into the tops of the completed cores, in half-landing sections, each weighing approximately one tonne.

“This meant we had access to all floors before construction began,” says Mr Hall.

All primary steelwork erected on-site by Cleveland Bridge is Advance sections from Corus. This new range, launched last year, includes 21 new section sizes ideal for long-span floors. More than 1,600t of the new Advance 610 x 178 UKB is being used throughout the project.

Dr Wong says this new section is lighter than previously available beams and the sections were specified because of the weight saving. “We are saving nearly 20kg per beam, and that is a very significant figure when you take the whole project into account.”

Once the initial floors were constructed, Cleveland Bridge has erected each subsequent level on a standard grid plan. The longest spans, from core to perimeter, are 13.5m while the perimeter columns are set at 9m spacings.

Structurally both towers are essentially a similar rectangular shape, excepting the West tower’s added space behind the courtyard. This part of the West tower will be a large 14-storey high atrium and it’s inclusion into the overall design required a new core to be added to the scheme’s existing main cores.

This new satellite core is a slender structure and needed temporary propping as it had to support one of the site’s five tower cranes. All of the project’s cores have one tower crane on top of them.

Cellform beams are being used throughout the project.

“Temporary props are required at various levels to resist the lateral load from the tower crane. Once the floors are erected and the satellite core is tied back to the main core, the temporary propping steelwork can be dismantled,” explains Dr Wong. The philosophy of putting tower cranes on top of cores has also been successfully deployed on other WSP engineered projects in London Docklands, such as the Barclays Bank Headquarters Building.

For the West tower the main steelwork challenge was the atrium area, which is mostly a column-free area all the way up to the 14th floor. “There are some big 25m-long beams spanning the atrium void,” says Dr Wong.

The atrium will eventually be glass clad and has a facade facing the courtyard which slopes from ground floor up to level five. From here on up the facade is straight.

“Designing the steelwork required a lot of coordination with the cladding contractor, especially in this area of the project,” comments Mr Hall.

Steelwork for both towers incorporates some large plate girders on the second floor which span over a double height entrance foyer. These large 15.5t sections were installed to accommodate differing column locations. “Again as the new steel frame kicks in the columns are in different grid lines from the basement level,” adds Dr Wong.

Similarly, on the East tower, Cleveland Bridge also had to install a series of large A-frame transfer structures below the ground floor slab to support the differing column lines. To pick up the loading from the steel columns above, the A-frames were installed to transfer load to the existing concrete columns and piled foundation in the basement.

Both towers will be clad in high-efficiency, solar control glass with much of the steelwork being left exposed for architectural effect. Construction work on the West tower is scheduled to be complete by April 2009. The East tower will be ready for fit-out in September 2009.