The Eurocodes are coming… but does the steel know?

Posted on January 1, 2005 by NSC2 in Projects and Features, Technical 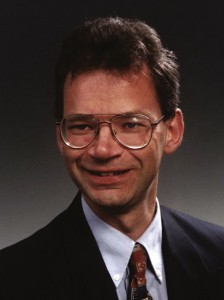 Steel’s fundamental behaviour is unchanged by the advent of the Eurocodes, and under the surface of the new documents there is much that should be familiar, says SCI Deputy Director David Brown.

Plenty of articles are starting to appear about the imminent arrival of the Eurocodes. From the Government down, there is an awakening of interest. In the constructional steelwork sector, projects are in place to support the implementation of the Eurocodes across Europe, and closer to home, detailed guidance for the UK is under way.

But, of course, no-one told the steel. Steel’s behaviour is entirely independent of any code – it obeys the laws of structural mechanics, whatever a national standard might say. The Eurocodes cover the very same structural mechanics as our own British Standards, so we would not be surprised to find that capacities (or resistances, in Euro-speak) are quite similar. We would also not be surprised to find that the approaches in, say, BS 5950, are often mirrored in BS EN 1993 (or EC3 for short) – although the methods are cunningly disguised to look different. Remove the disguise, and the methodology often looks comfortingly familiar. This article looks at just some of the significant technical areas in the Eurocodes, and tries to show that for BS 5950 designers, it’s not a step change to the Eurocodes. BS 449 designers take note…

The Eurocode approach does follow a different approach to BS 5950. We are all familiar with looking at the state of stress, and the stress raisers present in the steelwork to give a K factor from Table 3 of BS 5950. (At least we should be – but the vast majority of designers leave this important area untouched.) In BS 5950, we can then choose an appropriate sub-grade, depending on the thickest element and the service temperature. The approach in the Eurocode is to calculate a notional ‘reference temperature’, which is colder than the lowest air temperatures, and depends on the state of stress, strain rate and so on. For colder reference temperatures and thicker elements, a tougher steel sub-grade is required. Again, until the National Annex is published, direct comparisons with BS 5950 cannot be made.

One day, designers will thank the authors of BS 5950-1:2000 for introducing issues of sway stability with clarity into the national standard. Without such an introduction, the frame stability clauses in EC3 would be quite new – as it is, they appear as familiar friends. EC3 advises that frame imperfections must be modelled, and offers the diagram shown here as Figure 1.

Fortunately, the Eurocode also says that instead of modelling the frame with a real out-of-plumb, equivalent horizontal loads can be used. Here a sense of comfort takes over, as the equivalent horizontal loads are 0.5% of the factored vertical loads – our very own Notional Horizontal Forces (ie NHFs) in BS 5950. One interesting difference is that the Eurocode insists that NHFs are included in every load combination – whereas in the UK we only apply them in the ‘gravity load only’ combination. Many times, delegates on SCI courses have pointed out that the UK practice implies that frame imperfections switch themselves off when the wind blows. Our UK NHFs are so much more intelligent than their continental cousins, we reply.

Having just got used to measuring frame stability by λcr we must change to αcr and a slightly different calculation. But the difference is modest, and becomes insignificant in most buildings – so our structures do not suddenly become unstable. The Eurocode offers various other degrees of finesse in calculating the equivalent horizontal loads, depending on column height (“they can’t lean that much all the way up”) and numbers of columns (“they can’t all lean over like that”), which do look rather enticing to pursue. This can be helpful in reducing the lateral loads to be carried by bracing, for example. The reduced equivalent imperfection loads might also look attractive when calculating αcr. Investigating this for a recent course, however, we discovered that though the reduction looks attractive, the eventual impact in an amplification factor (equivalent to kamp in BS 5950) was a difference only at the third decimal place. C’est la vie! 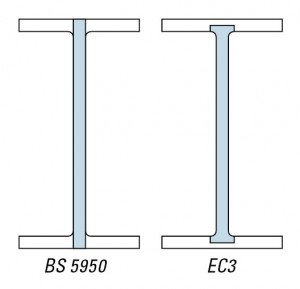 It is not surprising that the resistance of a steel section is well understood, after all these years. Section classi-fication is a modest change, but cleverly disguised by new symbols and changes to, for example, how outstands are measured. The familiar plastic, elastic and effective moduli are used for bending resistances. Shear and torsion are covered, and become new and exciting when found in combination with bending.

Many unfamiliar equations are available. At the simpler end, shear resistance of a rolled section is no longer based on an area of web × depth, but is instead presented as an area which is less than full depth, but includes the root radii and half the flange (see Figure 2). The difference must be tiny.

Again, since Euler discovered the basic rules of column buckling, we have understood the structural mechanics. Unfortunately, slightly different understandings have been adopted throughout Europe, and agreement on a unified set of checks has been difficult to reach. Whilst the calculated resistance may be very similar to the value according the BS 5950, the approach in the Eurocode will take some time to become familiar. 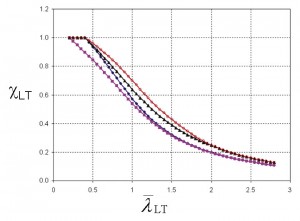 In much the same way as flexural buckling, we will calculate  λLT  instead of λLTB and find a relationship as shown in Figure 3.

The form of the curves in Figure 3 is familiar, and once we become used to calculating λLT  and finding a reduction factor, χLT, rather than a bending strength, we will not notice the difference in the final result.

Here be dragons! There is a host of possibilities here, with increasing degrees of deviousness in the calculations. At this stage, it is difficult to predict which approach the National Annex will recommend, and what simplifications may be possible.

This article has looked briefly at a few of the significant technical changes that will appear in the Eurocodes. More detailed articles will follow over the next couple of years, and once the Eurocodes are introduced. In summary, the presentation will be different, and there will be a different approach in some areas, but the calculated resistance will look familiar. If something suddenly becomes half as strong, assume you have made a mistake!