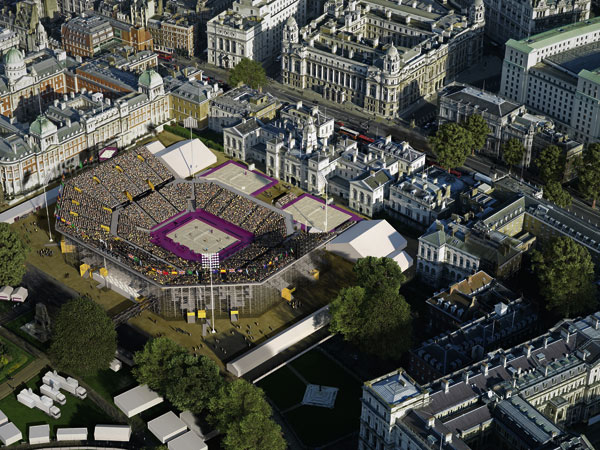 Plans for a 15,000 seater stadium in Horse Guards Parade to host Olympic beach volleyball have been submitted to Westminster City Council.

The temporary steel framed venue, created by architects Populous and engineering consultancy Atkins, will be dismantled after the Games. It will be erected in the space of six weeks and will be roughly the same size as Wimbledon’s Centre Court.

The arena will consist of two separate parts: an inner or lower bowl, and a three sided upper tier that will offer views of Big Ben and other notable London sights. Adjacent to the venue will be two warm courts, while the stadium will also have floodlights allowing evening competition.

Horse Guards Parade is London’s largest single open space, and was constructed in 1745 to house the King’s personal guards.

Jeff Keas, Principal of Populous said: “We have designed and will create a sporting arena where you would least expect it in the heart of historic London.”