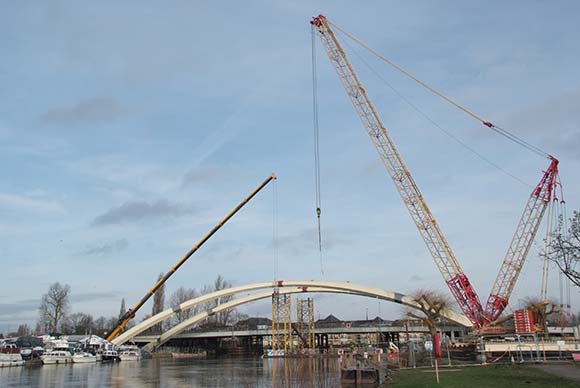 The bridge will be painted cream, a colour that is said to be swan friendly

A slim, sleek and arched steel bridge will help keep traffic flowing across the River Thames and aid safer navigation along the waterway. Martin Cooper reports.

The first new vehicle crossing of the River Thames since the Queen Elizabeth II bridge at Dartford opened in 1991 is taking shape at Walton-on-Thames.

This area of suburban Surrey has had a river crossing since 1750; the new replacement structure is the fifth to span the Thames at this location linking Walton-on-Thames with Shepperton.

Located between Chertsey Bridge and Hampton Court Bridge, both of which are Grade ll listed structures unlikely ever to get planning permission to increase their capacities, a signature structure with a long term capacity provision was essential.

A steel composite thrust arch, one that transfers its loads partially into a horizontal thrust restrained by the abutments, was chosen by Surrey County Council as the best and most economical way to achieve these goals.

“The client wanted an arch and steel was the best option to construct this type of bridge,“ says Andy Bannister, Costain Project Manager.

Walton Bridge will have a clear central span created by a 96m wide arch (the entire bridge is 148m long including back spans), and with no piers positioned in the water it will improve river views and navigational safety.

The bridge is being built adjacent to two temporary bridges that it will supersede upon opening later this year. The oldest of these, built in the 1950s to replace a bomb damaged structure, now only carries pedestrians and cyclists, while the other temporary bridge – which carries all road traffic – opened in 1999.

“The newest temporary crossing has a limited period of planning permission that expires in 2014,” explains Andrew Woodward, Surrey County Council Project Manager. “Consequently, we’ve been planning for this new bridge for some time and the selected thrust arch structure was chosen for a host of environmental and programme reasons.”

Constructing the bridge within metres of the existing structures will allow the project team to reap some programme benefits, as minimal road adjustments are necessary on either riverbank. 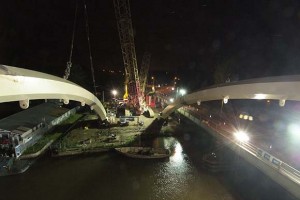 Welding enclosures were positioned at the top of the trestle

Building a structure across a river, even one that is usually quite benign at this upriver stretch, always brings with it a host of unique challenges. A temporary trestle was initially erected mid-stream to aid the bridge erection, while the latter part of the steel programme has relied on a floating pontoon to support a mobile elevating work platform (MEWP).

“A lot of our work has been dependent on the river speed,” adds Mr Bannister. “The Thames looks fairly sedate most of the time, but we’ve lost a few days when it’s been too dangerous to ferry workers out into the river.

Luckily the winter weather has not been that bad, except for a bit of snow. The steel erection was completed this February and the bridge is on schedule to open to traffic in July 2013.

Work started in January 2012 with the installation of foundations for the two abutments and for the midstream temporary trestle.

Steelwork contractor Mabey Bridge was then able to begin its erection work which kicked off with the setting up of the trestle, lifted into place by a 500t capacity mobile crane.

The structure’s signature arch needed to be built first as this would then allow the remainder of the bridge to be suspended from it.

The two hexagonally shaped arches were fabricated from plate and have a depth that tapers from 2.5m to a minimum of 1.5m at the crown. The arches are also hollow to allow for maintenance inspections.

Initially the two arches were fabricated into eight pieces. They were transported to site and welded into four larger 140t sections, each one a half of an arch, and these were then individually lifted into place.

Using a large 600t capacity crawler crane the two western halves (Shepperton bank) were lifted into place first. They were connected onto concrete abutments on the riverbank and temporarily supported at midpoint on specially made cradles on top of the trestle.

“We then had a week long operation of dismantling the crane and reassembling it on the east bank, so we could erect the other two halves,” says Gareth Day, Mabey Bridge Project Manager. 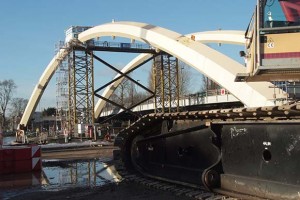 Welding enclosures were positioned at the top of the trestle

Once the four arch sections were all in place they were welded in situ, stressed and then released from the supporting trestle. The arches were now self supporting, so the trestle was dismantled and the team was able to begin installing the bridge hangers and installing the deck.

Workers in MEWPs, positioned on the pontoon, connected the solid steel hangers to the arches. The moveable raft was then used to aid the installation of the deck sections.

The deck steelwork was sent to site in numerous pieces and assembled into 10 ladder sections. These varied in length with the longest being 22m. Each section consisted of two outer 600mm deep J-shaped girders, with all connecting 13m long crossbeams bolted into position.

The girders were chosen as their profile allows the bottom flange to be hidden, aiding the desired sleek signature appearance. “On top of the steelwork there will only be a 250mm deck, meaning the bridge will have a shallow and thin appearance, which was a client wish,” says Robert Wheatley, Atkins Project Engineer.

Each deck section weighed up to 60t and was lifted into place with formwork already installed, meaning there would be less work to be undertaken over the river.

Having erected the steelwork, Mabey Bridge will shortly be returning to site to complete the painting. The steel will be a cream colour, a hue that is said to be swan friendly, easy for them to see and avoid when flying.

Once complete Walton Bridge will provide Surrey with a bridge that not only helps to maintain traffic flows across this busy part of the Thames, but also provides the local community with a signature structure to be proud of.