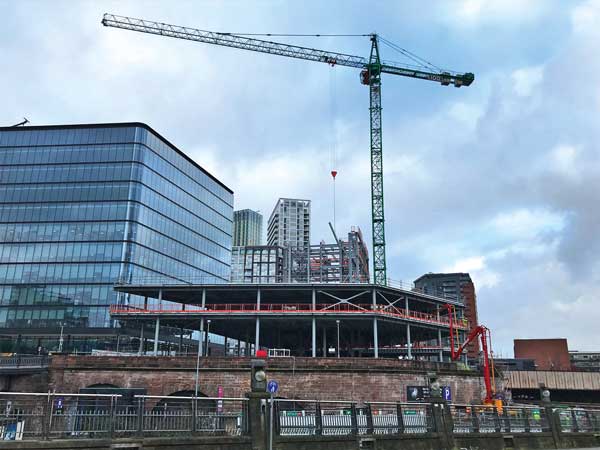 Confidence among developers is exceptionally strong across the UK’s regional cities according to the latest Deloitte Real Estate Crane Survey.

The survey monitored construction activity in Belfast, Birmingham, Leeds and Manchester during 2018. Each of these cities saw a sustained or increased level of development across a range of sectors including offices, residential, hotels, retail, education and student housing.

Commenting on the survey’s findings, Partner and Regional Head at Deloitte Real Estate Simon Bedford said: “To have construction figures this healthy is somewhat of a surprise given a myriad of market uncertainties. Developer confidence is a key indicator for economic health and to have this many significant construction starts over the last 12 months, especially in speculative office schemes, is testament to the resilience of the regions and appetite for growth.”

Top of the list for construction activity is Manchester, which has seen record levels of development activity.

Bedford commented: “If Manchester had featured in the recently published North American Crane Index, it would have ranked number two – behind Toronto but in front of Seattle, Los Angeles and Chicago. That might have seemed like a remarkable stat a few years ago given Manchester only had one crane in the sky in 2011, but today the figure is a massive 78 sites under construction.”

Across the Irish Sea, Belfast has 34 schemes under construction in the city centre – with 21 schemes completed in 2018 and nine set for completion this year.

Birmingham saw 23 new starts last year, with residential taking the lion’s share. New office development is down from a peak of seven new starts in 2016, to just two new schemes today. However, total office volume under construction remains high at 130,000m² and 2019 is set to be a record-breaking year for office completions.

Leeds has recorded the highest level of construction in the city centre since the Leeds crane survey began in 2002, with 21 new construction starts in 2018. This includes seven new office schemes adding to the record 78,500m² office development currently in the pipeline.