SSDA 2011 – Steel projects prove their worth at awards

The Structural Steel Design Awards celebrated its 43rd year showing yet again that steelwork is the framing material of choice for imaginative and high profile projects.

Awards were presented by journalist and television presenter Susanna Reid at a ceremony at Kings Place, London on 7 July. Judges selected the Award winning entries from a shortlist of 18, all of which scored highly in efficiency, cost effectiveness, aesthetics, sustainability and innovation.

Judges Chairman David Lazenby said the 2011 entries compared well with those of any year since the awards scheme was launched in 1969. He said: “The old saying “when the going gets tough, the tough get going” is well illustrated by the entries for this year’s Structural Steel Design Awards. The skill, imagination and determination of these project teams is remarkable, at a time when the steelwork industry has inevitably been affected by the current economic climate.

“We have seen very high quality commercial offices, stadia and other sports facilities, large public buildings and interesting bridges. Adding a key rail station, an enormous distribution centre, a waste-to-energy plant and two remarkable structural sculptures, we have as good a collection of projects as most of us can remember.”

“I have no doubt that the SSDA scheme has been an important stimulus to the steelwork industry over the years, and the results are clear to see. All the teams can be proud of the outcomes which are really praiseworthy and the judges have been heartened by them. We hope that everyone will share our enthusiasm.”

The evening’s opening address was given by Dr Henrik Adam, Chief Commercial Officer of Tata Steel Europe. He said he was proud of steelwork’s success and attributed this to Tata Steel’s work with customers and trade associations, such as the BCSA.

“Our close partnership is one of the reasons that the UK construction industry has the highest structural steel intensity in the world. Over 70% of multi-storey commercial buildings and virtually all single-storey sheds have a steel frame. We also see here tonight, that steel is the choice for bridgeworks, stadia and other iconic structures.” 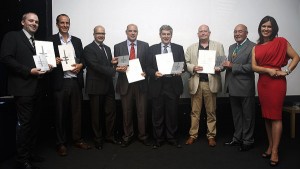