The Advisory Desk is asked, from time to time, for guidance on movement joints in steel framed buildings. Most of the queries seek guidance on the detailing of slotted holes for bolted connections. This AD Note discusses the considerations that need to be made when providing a connection between structural members at a movement joint.

If possible, movement joints should be avoided by splitting the large structure into smaller independently stable frames by use of double lines of framing, so that there is no load transfer between adjacent frames. However, non-structural elements between the frames still have to be detailed to accommodate relative movement between adjacent frames.

Another possibility is to avoid a movement joint and to design the frame and the connections for forces due to restraint of movement.

However, where a movement joint is provided, it should be properly detailed to ensure that the movement can actually take place. In most steel-framed structures, relative movement between connected elements is achieved by allowing one part to slide on the other. The sliding surfaces must therefore be suitable for the repeated movement over the life of the structure, whilst transferring forces in bearing. Any movement joint will inevitably induce additional eccentricities in the supporting members, and the person responsible for the design of the structure must take this into account.

Proprietary structural sliding bearings (manufactured in accordance with EN 1337: Structural bearings (in 11 Parts)) are the most effective means to provide a movement joint and are recommended. An example of such a bearing is shown in figure 1. Further guidance is available at www.steelbiz.org in document SS017 “Scheme Development: Movement joints in steel buildings, 2006”. 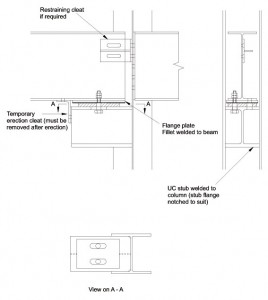 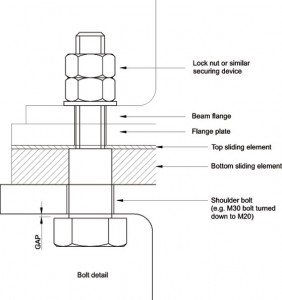 It is essential to be able to predict the range of movement and to allow for the relative positions of the two elements achieved during construction: there must be a tolerance in relative position. Calculations are required for movement for the design temperature range and movement due to deflection under load (this may be more difficult to predict because of uncertainty of connection stiffness throughout the structure, etc.). Ensuring that the relative locations are within tolerance will require verification after installation – if the beam length were too long or short, then a bolt in a slotted hole might be at the end of the slot instead of the middle.

In a beam to column connection, it might be thought at first sight that a suitable detail could be achieved by providing a fin plate type connection with slotted holes and using “shoulder bolts”. Shoulder bolts would be used to ensure that not even a modest preload would occur, since that would cause unwanted (and unpredictable) frictional resistance. Such a detail would be simple and inexpensive but there is a significant limitation to its applicability as it is only suitable for very light shear loads. The bearing pressure between the bolt shank and the edge of the slot will result in deformation of the slot, even at loads that are very much less than the shear resistance of the bolt. This deformation will both impede the movement and cause wear. In the extreme, this could lead to the joint locking up, with potentially harmful consequences. Such a connection is therefore not suitable for transferring anything more than infrequent and very modest forces.