Once again the Structural Steel Design Awards provide a focus for us to celebrate a wonderful array of projects which have steelwork as the structural material of choice. The past year has seen a good level of activity in the industry, and certainly the quality of much of the work has been remarkably high.

I have previously remarked that the number of entries submitted to the SSDA does not necessarily relate to the standard achieved, and this year well illustrates the point. The entries were all good, some were very good and a handful were outstanding. The judges have repeatedly been impressed by the project vision, the structural concepts and the quality of execution.

There has been a slight geographical skew this year towards the South of the UK, both in the entries and the winners, but I do not expect that this is more than temporary. Whilst it has made the logistics of judging a little easier, I look forward to a more “normal” spread in future.

The range of work continues to be enormous. Two major iconic projects at national airports, the home of a national assembly, two (very different) stadia roofs, a sports training centre and a college, a museum and a “temple to technology”, a bus station roof and a tiny café enclosure – what wonderful diversity!

My fellow judges and I, together with the Sponsors, thank all the teams for submitting their schemes to the SSDA. I have no doubt that we will all enjoy the results of the skill and hard work which have made them so successful. 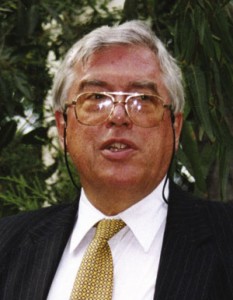 Mr Lazenby’s career began as an Assistant Engineer with Balfour Beatty in 1959. In 1964 he moved to consultant Andrews Kent & Stone, where he stayed for over 30 years and became Managing Partner and subsequently a Director. In 1990–91 he was one of the youngest ever Presidents of the Institution of Structural Engineers.

His experience both as a user of standards and as a committee and board member helped him to bring a new focus on market relevance, and he is credited with bringing success to the organisation and establishing it as a leader in its field, as well as making it profitable, almost unique among national standards bodies.

Martin Manning joined Ove Arup in 1968 on graduating from Cambridge University and has stayed there ever since. He is now a Director. He has worked primarily on structural designs which have required working from first principles rather than applying empirical rules. His work has taken him to Arup offices around the world, including Zambia, Tehran and Hong Kong, and he has worked with a roll-call of top architects, including Frei Otto, Lord Foster, Richard Rodgers, Michael Hopkins and Nicholas Grimshaw.

Projects and buildings he has been involved with include the Reichstag refurbishment in Berlin, Chek Lap Kok airport in Hong Kong and the Thameslink 2000 station at Blackfriars in London. He is a Fellow of the Royal Academy of Engineering.

In 1994 he joined the London Network Management Division of the Highways Agency, responsible for the maintenance of highway structures in West London. A number of senior technical posts at the agency followed, culminating in his present appointment as Group Manager of the Asset Management Performance Group.

Chris Nash is Managing Director of architectural practice Grimshaw, and is responsible for the strategic planning of worldwide business. He studied architecture at Bristol, graduated in 1978 and joined Grimshaw four years later. He has been responsible for the design and timely delivery of many of the practice’s high profile buildings.

These include – from his early years – the Financial Times Printing Works in London’s Docklands and the British Pavilion for the Seville Expo 92, The Western Morning News headquarters in Plymouth, the RAC Regional Headquarters in Bristol and many other projects. Chris is currently heavily involved with BAA’s Stansted Airport Generation 2 Masterplan, Bournemouth Winter Gardens and the Cutty Sark conservation project.

Architect and planning consultant Robin Booth grad-uated in architecture from Cambridge University and has a Master’s in Urban Design from Edinburgh University. He has been Project Architect and Partner in charge of prestige projects like the Standard Chartered Bank headquarters and has maintained a career long interest in town planning.

He has experience in the public and private sectors, on a wide range of projects from local authority and student housing to leisure and corporate headquarters buildings, and also on urban regeneration sites. He was Partner and then Director with the well known architectural practice Fitzroy Robinson Limited from 1980 to 2001 and subsequently Architect Director of Building Design Partnership, London Corporate Group. He currently works on his own as a Planning and Architectural Consultant.