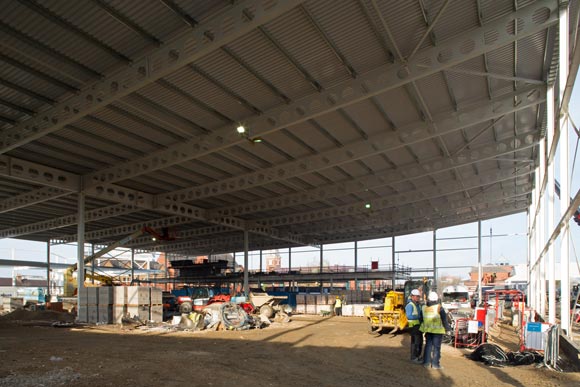 The supermarket is topped by a curved roof

Wiltshire’s largest town is poised to receive a retail and entertainment boost with the construction of the £16.5M Regent Circus scheme.

As well as regenerating the town centre site, the scheme will dramatically alter and improve the local streetscape as main contractor ISG’s programme also includes the realignment of surrounding roads. 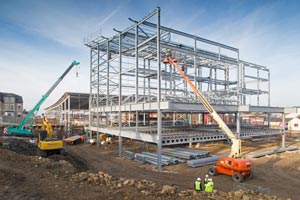 “This is the biggest project to take place in Swindon town centre for a long time,” says Gareth Davies, ISG Project Director. “It will have a huge impact on the local economy.”

Structural steelwork is playing a major role in the scheme as all of the buildings are formed from two large interconnected steel frames.

Before steelwork contractor Hambleton Steel could deliver and erect any of the project’s 1,900t of steel, a large earthmoving programme had to first get under way.

The site had already been cleared of buildings when ISG started on its contract as the old college had been demolished under a separate contract. With demolition completed ISG had to begin levelling a site that sloped down as much as 10m from the south boundary.

“We have installed a retaining wall that is 25m high in places and once the steel frame is complete it will support some of it,” explains Mr Davies.

Because of the site’s differing ground conditions, the retaining wall has been constructed with contiguous piles (which are self supporting) where the ground is rocky and sheet piles where it is softer.

The portion of the wall constructed with sheet piles has been restrained by the steel frame through a series of beams that form the walings and span between the columns.

“The part of the steel frame which adjoins the sheet piled wall contains the car park and cinema,” explains Thomas Fitzpatrick, Upton McGougan Engineer. “In these areas the steel frame supporting the car park was stiffened by inserting horizontal bracing, which diverts the extra load from the wall to the frame and then to the piled foundations.”

Designing the steel frame for these areas required a lot of cooperation between the various trades as Mr Fitzpatrick continues. “It was a very challenging overall design which used all the advantages of the latest 3D modelling programmes. The horizontal load on the wailings from the sheet piles was calculated by the sheet piling contractor. These were then used in the design of the steel frame. The horizontal reaction at the column base of the steel frame were then used by the foundation contractor to design the piles.”

The design of the project’s steel frame has also undergone a value engineering process in order to make it as cost-effective and efficient as possible.

Hambleton Steel’s design team used Westok cellular beams throughout the project, not only for service integration, but also to keep the overall steel tonnage down and make the frame more economic. The decking contractor recommended the thinnest possible topping for the metal decked composite floors, again to make the frame as economic as possible.

Levelling the site has meant that a huge amount of overburden has and is still being removed from the site. Mr Davies explains that much of the material leaving the site is being reused and a large percentage has already been used to reform a local golf course.

“In areas where the earthmoving has been completed the steel erection is ongoing, while on other parts of the site we still have excavation to do. Having so many different trades on site has been a significant logistical challenge,” says Mr Davies.

With space at a premium and little or no room for material storage all deliveries to site, including steelwork, are on a just-in-time basis.

The steel frame is being completed sequentially as various parts of the project have different scheduled completion dates. The Morrisons supermarket was the first part of the project to be erected and it will be handed over to the tenant in April. The following month Cineworld will take possession of its complex and the entire development will then be completed in July. 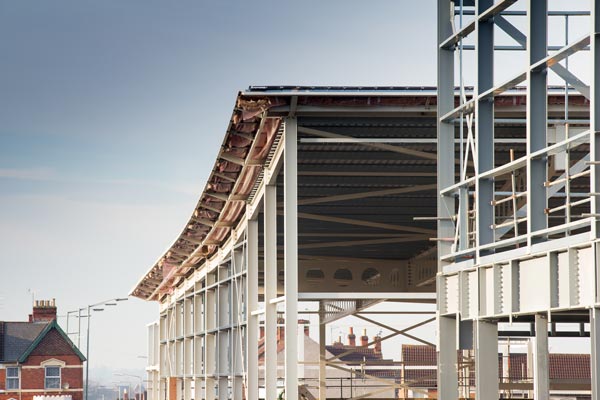 The project includes a 60m long x 63m wide portal framed Morrisons supermarket. This has been designed as a three span braced frame with added moment frames to reduce the weight and size of the main steel members.

The store features a one span wide internal mezzanine level along one elevation while a distinctive curving roof, formed from faceted steelwork, tops the frame.

Unlike the supermarket the second frame consists of a number of floor levels, ground floor being the lowest level of the car park, level one accommodating a covered internal retail street and the second car park level, and the third floor which again accommodates car parking as well as the main part of the cinema complex.

The ground floor car parking zone will be solely for the use of Morrisons’ shoppers and the store will consequently have direct access to the car park.

The car park is based around a 16m x 11m grid and where necessary, cellular beams have been used to accommodate numerous services from the various mixed use tenants. Both the car park and the cinema floor plates are formed using composite beams and a composite metal deck system. Stability is provided by a combination of braced bays and moment frames

The two individual frames abut one another and a double row of columns, between the supermarket and car park, give the impression that in fact the project is just one large frame.