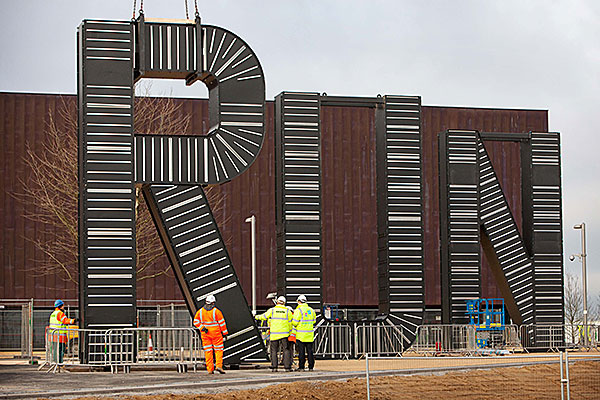 A large sculpture featuring three 10t letters, spelling out the word ‘RUN’, has been installed in the London 2012 Olympic Park.

Created by renowned artist Monica Bonvicini, it is the largest standalone artwork in the Park and has been erected adjacent to the Copper Box, the new name for the Handball Arena.

Inspired by song titles such as The Velvet Underground’s Run Run Run and Bruce Springsteen’s Born to Run, the artwork has been constructed from steelwork and reflective glass, producing a mirrored effect during the day and light glow at night via installed LED lights.

Dennis Hone, Olympic Delivery Authority Chief Executive, said: “The RUN sculpture will not only become an attraction for the Olympic Park during the Games but also for years to come as a focal point for the many thousands of visitors that will come when the Park is transformed after the Games.”