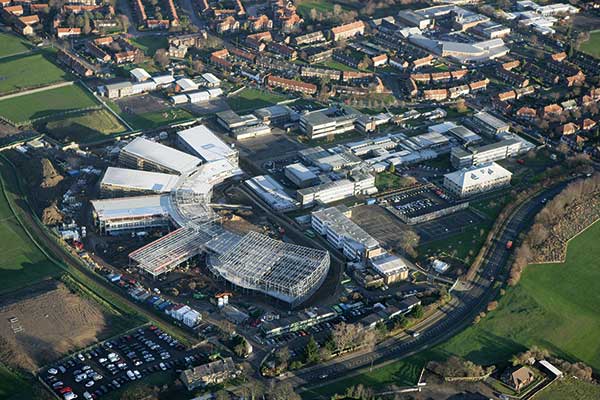 Covering an area the size of four football pitches (19,000m2), the recently opened steel framed Kenton Secondary School in Newcastle-Upon- Tyne has been described as a blueprint for future educational construction projects due to its inno- vative design.

The school is made up of five main teaching blocks connected via a curved crescent, or street, which ends at a large sports hall complex.

Mike Goldsmith, Project Engineer for Parsons Brinckerhoff, said the most challenging aspect of the job was the shape, in particular the curved geometry of the street and the sports hall’s rear wall.

“The curves of the street aren’t uniform, be- tween each teaching block they change,” he explains. “Another challenge was where to split the structure for movement joints as generally the whole building doesn’t lend itself to this.”

Steelwork contractor Hambleton Steel was on site for 21 weeks and erected approximately 1,100t of structural steel for the job.

said the job was very complex as there were no square grids. “All steelwork is at a radius, nothing is straight even the teaching block’s footprints fan out.”

“This is the sixth and largest new school we have delivered for Newcastle and it is a great example of the benefit properly directed investment can bring to education.”