Outdoor and indoor athletics facilities will be available

East London will see a number of sports facilities being constructed in the coming years as the countdown to the Olympic Games gathers pace. But in the meantime, just a few miles from the designated Olympic site, an impressive new sports centre boasting both indoor and outdoor athletics tracks is nearing completion.

Located in Edmonton, the 9,700m² Lee Valley Athletics Centre, while primarily for the training and development of elite athletes on UK Athletics’ World Class Programme, will also be home to the renowned Enfield & Haringey Athletics Club and serve the regional and local communities.

Although the project was designed before London was awarded the 2012 Games, due to its proximity to the soon-to-be-built Olympic Village and Stadium, it is also envisaged that the Centre will be a key training facility and possibly an event venue for London games. 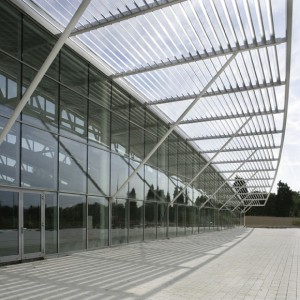 The glazed facade will allow daylight into the centre

Main contractor for the project Shepherd Construction started work on site in June 2005 and initially had to demolish an existing leisure centre which included an indoor swimming pool and squash courts, and outdoor five-a-side football pitches and a golf driving range.

Preliminary works also included some extensive piling, with more than 1,000 piles being installed to support the Centre’s concrete slab.

As Paul Steele, Shepherd’s Divisional Construction Manager explains, the area where the Centre sits was originally occupied by football pitches and a former gravel extraction pit, and consequently the ground wouldn’t have supported the new structure.

However, prior to any piling work being carried out the ground had to be decontaminated. “We discovered the site had been a landfill about 40 years ago and after doing environmental testing we knew there was quite a lot of material that had to be removed,” Mr Steele explains.

Shepherd wanted to keep most of the overburden on site and consequently the spoil which wasn’t contaminated was simply built into bunded terrace areas which surround the outdoor track.

“The problem we encountered was that there was quite a bit of highly contaminated ground and we found ‘Blue Billy’ which is a toxic by-product of gas production,” Mr Steele says. “And this had to moved off site.”

Once the earthmoving and piling work had been completed the Centre’s concrete slab was then cast in one continuous week-long pour.

Sitting on top of this concrete slab the steel-framed Centre is 135m long x 85m wide and was erected by steelwork contractor S.H Structures during an eight week programme.

The single storey Centre consists of a banked 200m eight-lane running track – which is sunk into the slab, netted areas for throwing events, areas for jumps and pole vaulting and a mezzanine level upon which is a 130m-long straight sprint track. 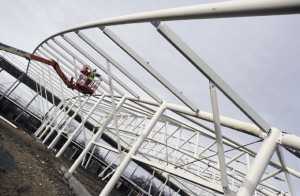 A total of 14 trusses will support the roof

Andrew Best, Project Leader for Buro Happold says the design of the Centre had to allow  for all of the above events to be held within the Centre and a simple box with a sweeping curve over the sports hall was the starting point.

“We started off with a simple design and worked from there,” Mr Best says. “The requirements included a clear open span sports area with enough clearance and height for events such as the pole vault,” he adds.

In order to achieve the best fit with the minimum envelope the design incorporated a raised sprint track sitting on a pre-cast concrete floor above the toilets, gym and changing room block. This sector is constructed with predominantly UC columns and beams, with floor beams typically 152mm x 152mm UC’s and UB’s of 533mm x 210mm x 122mm.

Meanwhile, columns are generally 203mm x 203mm x 60 UC’s, while in the main hall the columns are mostly 323.9mm x 10 CHS members which support 14 trusses, which in turn support the roof. “By utilising raking columns they not only helped with the structure’s stability but also meant the trusses only had to span 59.8m,” Mr Best explains.

The long span curved tubular trusses vary in depth from 1m – at the east elevation – to 2.5m at the west elevation which is adjacent to the steel box structure containing the raised sprint track. Each truss is connected to the next truss via CHS top and bottom chords with CHS infills. This creates a ‘saw tooth’ or ‘north light’ effect along the roof, and each truss is hidden beneath glazing.

S.H Structures says the trusses were fabricated in three sections which were checked for fit during the assembly process at its works facility. The sections were detailed in lengths to allow normal transport by road, with the maximum sub-assembly length being the central section which was 21.6m long and weighed approximately 12t. The trusses were also detailed with a conventional bolted splice instead of a fully welded splice, which the company says produced a quicker, safer and cost effective erection procedure.

Tim Burton, S.H Structures’ Sales and Marketing Manager adds the project was fully modelled and detailed using Tekla X-steel. “In addition to being used for the normal production of shop fabrication and assembly drawings the 3D model was also used on site by our site manager as a planning and scheduling aid.”

“The site manager was able to communicate the details of the erection sequence to the site operatives using precise 3D representation of the complete structure,” Mr Burton says. “This has proved to be a very successful addition to the normal method of communicating the requirements of the site method statement.”

Sustainability played an integral part in the design of the Centre and in order to minimise the use of electricity the peaks of the trusses have windows which open automatically to allow natural light and fresh air into the building.

In order to allow more daylight into the Centre the entire south facade is glazed to the underside of the truss. This glazed facade is built up entirely with structural steelwork and has additional ‘brise soleil’ solar shading panels over the top.

Taking the sustainability aspect even further, the flat roof over the raised sprint track has a gravel roof to accommodate a rare British bird. As Mr Steele explains there are only about 16 nesting pairs of Redstarts and quite a few of these are found in the Lee Valley region.

“They like to nest on gravel-like ground,” Mr Steele says in explanation as to why this material was used. The flat roof extends the entire length of the structure on the west elevation to a depth of approximately 10m.

Meanwhile on the outside of the Centre, Shepherd is currently putting the finishing touches to the outdoor athletics track. This area also required some extensive groundworks, but building an outdoor track on piled foundations was deemed far too expensive and so the area was dynamically compacted to the required flatness.

Whether the Centre ends up being used during the 2012 Olympics or not, without doubt North East London has acquired a new and first class Athletics Centre which is due to officially open in January 2007.

The centre will serve regional and local schools and clubs