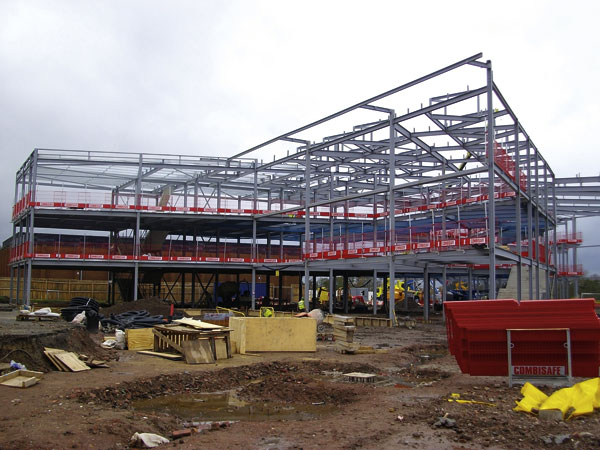 Structural steelwork is playing an important role in the construction of three new schools currently being built in Oldham by main contractor Willmott Dixon.

The three schools, Oasis Academy, Waterhead Academy and Oldham Academy North, each feature a steel frame. North Wales based EvadX is the steelwork contractor for the Oldham North Academy project (pictured), while James Killelea is fabricating, supplying and erecting the steel for the other two academies.

All three projects have been designed as architectural landmark buildings, and in the case of Waterhead, the school will also help harmonise the town’s two main communities. Replacing two schools, one 98% Asian and the other 98% white, the new Waterhead Academy will bring these two communities together under one roof.

The Oasis Academy is being sponsored by Christian charity Oasis and is located on a former mill site overlooking the town centre. Because of this prominent position, an iconic steel structure is being constructed.

Oldham Academy North is a large triangular shaped two storey structure being built on the grounds of Our Lady’s High School while it remains in use. EvadX will eventually erect approximately 350t of steel for this job.

All three schools are scheduled to be complete in time for the 2012 autumn term.