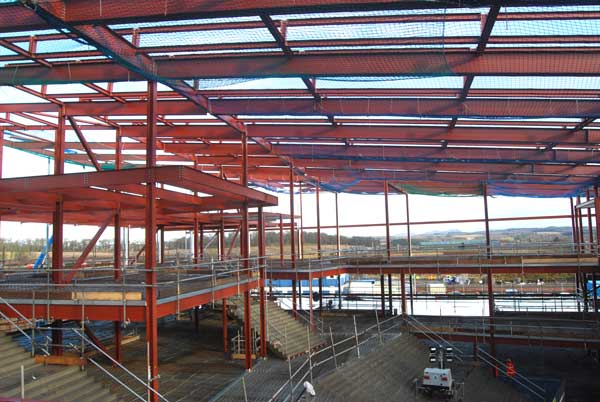 A new school for a new village on the outskirts of Perth is being constructed by Robertson and steelwork contractor Walter Watson.

The steel frame for the project, comprising approximately 720t of structural steelwork, has recently been completed and roofing and flooring installation is now under way.

Known as Bertha Park, the new 800-acre village is being spearheaded by Springfield Properties, which secured planning consent for its master plan in 2016.  The construction of the proposed 3,000 homes will continue for the next 30 years, creating about 450 building jobs.

It is hoped that by building the £31M Bertha Park High School in the early stages of the development families will be encouraged to move to the village.

“The project is unique in the current Scottish schools programme as it isn’t a replacement for an existing school, rather it is an entirely new building to serve the growing population of Perth,” explained Robertson Operations Manager Robbie Kerr.