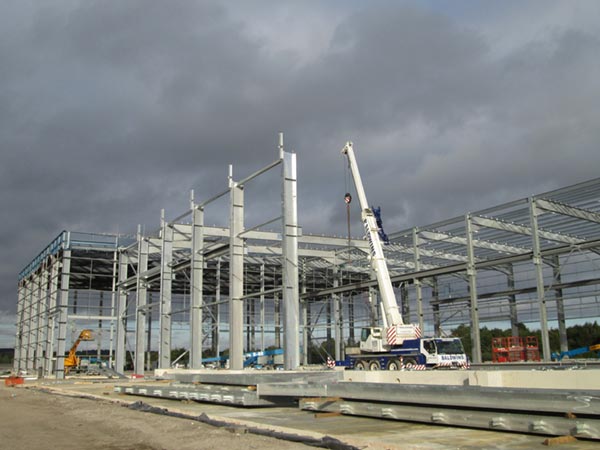 In South Yorkshire, three local authorities – Barnsley, Doncaster and Rotherham – have worked together for more than a decade to deal with waste from the area. Known as the BDR Waste Partnership, it has commissioned Shanks and Scottish & Southern Energy, to construct and run a waste facility that will treat up to 265,000t per year of leftover household and a small amount of commercial waste.

To meet the construction programme the overall scheme has been divided into two contracts, with the larger one being built by Balfour Beatty. This consists of a mechanical biological treatment (MBT) plant that will dry waste, and recover and process materials that can be reused, such as metals, glass, plastics, compost and stone.

The solid recovered fuel from the MBT process will be used to generate electricity at the nearby Ferrybridge power station. 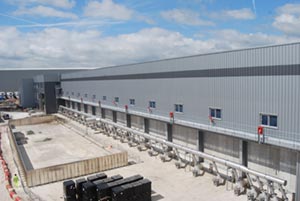 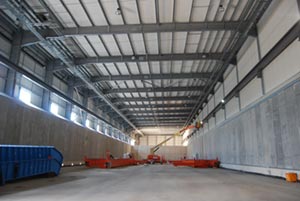 Inside one of the 112m long drying bed halls

Being built under a separate contract, but part of the overall facility, is an anaerobic digestion plant (see box) that will compost residues from the MBT process, producing renewable energy and a digestate for compost and fertiliser.

Balfour Beatty started work on the former colliery site in September 2012 and initially had to construct a culvert so an access road could be built over a stream. The waterway had previously cut the site off from any major roads.

“Once excavation and piling had been completed we then started a phased construction programme, whereby the main substructure works were being done at one end, while steel erection was begun at the other end of the building,” explains Pete Finegan, Balfour Beatty Project Manager.

“The tipping hall has two 5m deep refuse pits and it was important to have these completed before the frame was erected over them, so this area was the final part of steelwork to be done.”

Working in this phased manner Border has erected 1,600t of steelwork for the project, a contract that also includes ancillary buildings consisting of an administration and visitor centre, workshop and substation.

The internal floor slabs were all also cast prior to the steel erection programme and used as the working platform for the cranes.

Using a variety of mobile cranes, from 35t up to a 250t capacity unit, Border was able to erect all of the main steelwork from inside the structure’s footprint, leaving other areas of the site relatively clear for other trades.

“Coordination has been very important as it is quite a tight site with limited access and we have always been working around many other trades,” says Douglas Corbett, Border Steelwork Structures Project Manager.

Although it comprised the final part of the steelwork erection programme, the tipping shed is in fact the initial port of call for the waste process. A large 75m × 30m single span portal frame has formed the required long clear space for trucks to enter and turn around in.

“Most of the treatment facility requires long clear spans for its industrial use, this is best achieved using steel as the main framing material,” says Dave Fielding, URS Project Engineer.

“It’s a typical design with bracing at roof level for stability and to limit movement between bays.”

The potential for movement was greatest in the bio-drying hall, as it has to accommodate six overhead gantry cranes that will move the waste. Because of the speed the cranes will move at, tolerances are very tight and a stiff structure was required to limit deflections. Large 16m high 914 columns on fixed bases have provided the stiffness to support the facility’s crane beams.

The waste process is divided into two adjacent treatment lines and so the bio-drying hall is a twin-portal frame connected to the tipping hall but positioned at a 90 degree angle to it.

Each of the two 25m wide spans accommodates a refuse pit and 112m length of drying bed.

The refinement hall, which is the area where the final product is sorted, was the first part of the structure to be erected. This is another large two span (30m each) portal frame, which in turn is connected to the bio-drying halls.

Adjacent to the bio-drying halls are two steel framed control room structures, one two-storey unit and the other three-storeys high. Although they are part of the main building they have been designed as two independent braced steel structures.

“We needed to limit vibration from the process area to the control rooms,” explains Mr Fielding.

Working progressively along the entire frame, Border erected the steelwork bay by bay and once complete it then installed the roof and the cladding.

It used MEWPs for the cladding installation and a 50m-reach mobile tower crane, positioned alongside the structure, for the roofing.

As well as cladding and roofing, Border has also been responsible for the installation of windows and doors, and external and internal gantries.

The Manvers BDR site is due to start processing waste early next year. 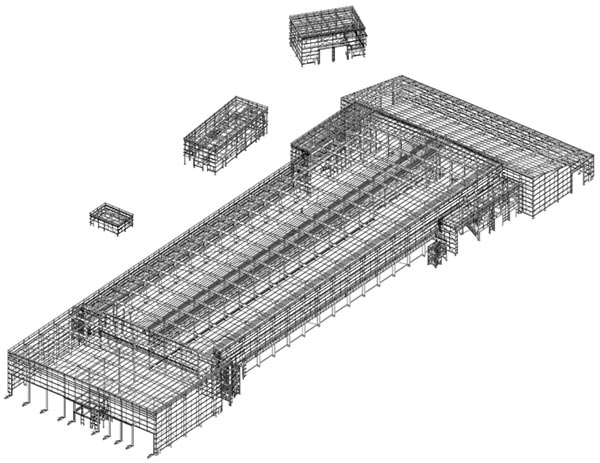 Rippin Steel working on behalf of Luddon Construction fabricated, supplied and erected the steelwork for the site’s anaerobic digestion plant.

Erected on top of a concrete substructure, the steel frame consists of a three span prop portal, with each span 21m wide by 70m long.

Rippin has erected approximately 190t of steel for this project, a total that includes 40t of cold rolled purlins.

“Some of the steelwork has been galvanized, and the balance, including the purlins has had a high specification protective paint system applied because of the corrosive atmosphere associated with the anaerobic process,” explains David Jamieson, Rippin Managing Director.