Starring role for steel at the opera 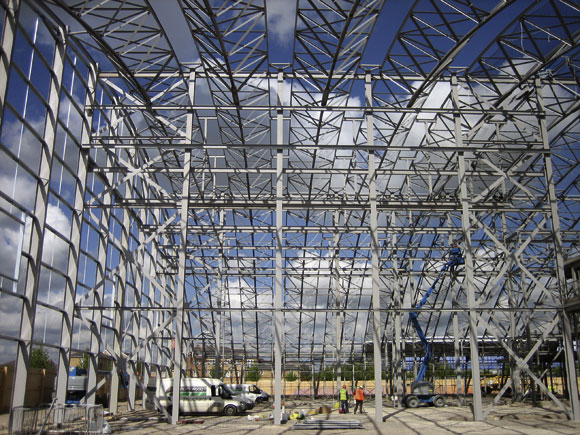 A series of lightweight trusses form the distinctive roof

Located within the Thames Gateway, Europe’s largest regeneration area, an eye-catching steel-framed production workshop for the Royal Opera House will soon bring a host of new and varied opportunities to local people.

By the end of this year the doors of the brand new, state of the art, Royal Opera House Bob and Tamar Manoukian Production Workshop will open on a 14-acre site in Purfleet, Essex. The centre represents the UK’s first ever national centre of excellence for technical skills, crafts and production for the performing arts and live music industries, and will be a unique and valued resource.

Situated within Europe’s largest regeneration scheme, the locally based Thurrock Thames Gateway Development Corporation has some grand plans for the project and its environs. Central to this is the proximity of the Royal Opera House facility, which will act as a magnet and draw in other businesses associated with the creative and cultural sector.

The site will eventually include a National Skills Academy and workshops for creative enterprises. Community, education, exhibition and meeting spaces will be located in the restored Grade II High House Farm buildings that are at the heart of the development.

The eye-catching workshop is where the scenery, needed for opera and ballet productions, will be made. Carpentry workshops, painting areas and associated office space will all be included within one large 75m x 45m domed building which rises to 20.5m at its apex.

The structure is large and its distinctive rounded roof can clearly be seen from the nearby Dartford Crossing. Creating a landmark, and one that also scores highly on the sustainability chart, was one of the leading design criteria for the project team. To this end some notable features include a green sedum roof which is interspersed with strips of uninterrupted rooflights. This roof design has the benefit of minimising rainwater runoff, while also maximising natural daylight penetration into the building. Ground source heat pumps will supply the energy for the structure’s underfloor heating. 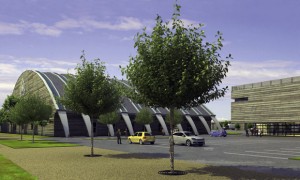 “These features aid the building’s environmental and ecological performance and have helped us achieve a BREEAM ‘Excellent’ rating,” says Eddie McGillycuddy, McLaren Construction Project Manager. “While the striped sedum and rooflight design is also aesthetically pleasing on what is a very prominent building in the area.”

Value engineering also played a key role in the design stages of the project and a steel frame comprising lightweight trusses, as opposed to a portal frame was chosen as more cost effective.

The roof’s shape came about because of the client’s desire for a stand-out structure, as opposed to a run of the mill industrial unit. However, designing and then erecting the roof has been a challenge for steelwork contractor Graham Wood Structural.

“The building is situated on reclaimed land and so we had to limit the loads being transferred to the foundations,” says Norman Hawkins, Graham Wood Project Designer. “The trusses which form the roof have been fabricated from lightweight steelwork – channels and angles. These are cost effective as well as the ideal method for forming the distinctive domed shape.”

A total of nine trusses span the 75m width of the building and these are 1.7m deep by 3.5m wide triangulated feature items of steelwork. Each truss was brought to site in five separate pieces and then erected sequentially by two 35t capacity cranes.

The main steelwork frame was also erected at the same time, with Graham Wood’s erection team starting at one gable end and then working southwards through the structure’s width to the opposite gable.

Internally the building has two lines of columns, providing the structure with large spans of 25m, 20m and 30m.  The central span required one 20m-long section of truss, while the outer two spans were each completed with two sections forming the 25m and 30m truss sections.

“We erected each of the five trusses along with the main steelwork, bay by bay,” explains Jeff Beverley, Graham Wood Contracts Manager. “Once the relevant perimeter steelwork and supporting internal columns were in place the trusses were erected. The outer sections of truss were each lifted individually by one of the cranes and bolted together in the air. It took a day to erect each truss.”

Once one outer section of truss was bolted into position, the main central span was then completed, before a similar dual lift procedure was necessary for the other outer piece.

Either end of the structure has a row of V-shaped buttress columns which will remain exposed beyond the line of the cladding. Standing approximately 7m high, these galvanized tubular columns compliment – and extend and follow the rounded roof’s shape to ground level – as they are positioned at a slightly skewed angle.

To eliminate downward thrust from the roof structure one set of buttress columns is fixed and structurally integral, while at the other end they are connected to the roof trusses via a movement joint. Meanwhile, stability for the building is derived from bracing located along each of the internal 5m bays and at each end of the structure.

As well as the required open spans needed for the large workshops, the structure also features a three-storey internal office and plant room structure which measures approximately 25m x 15m.

Constructed in a traditional steelwork beam and column format, this sector, which sits almost centrally inside the building, was actually the first part of the project to be erected, with the main frame then being built around it.

Other internal steelwork features include two platforms for hanging scenery backcloths, while they are being painted. Each platform is 24m wide and includes two 14.5m high end columns which are restrained at the top, from the underside of a truss, for stability.

The Royal Opera House Bob and Tamar Manoukian Production Workshop is scheduled to be completed by November 2010. 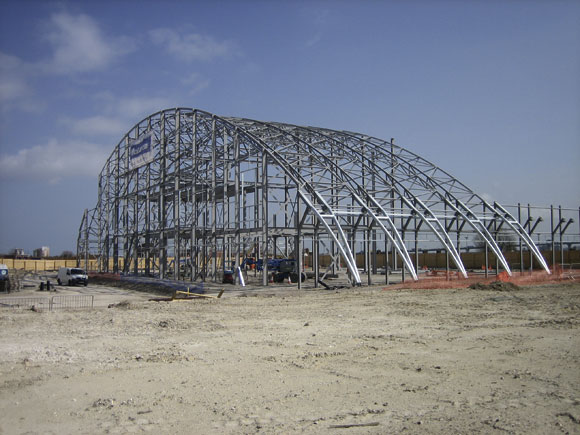