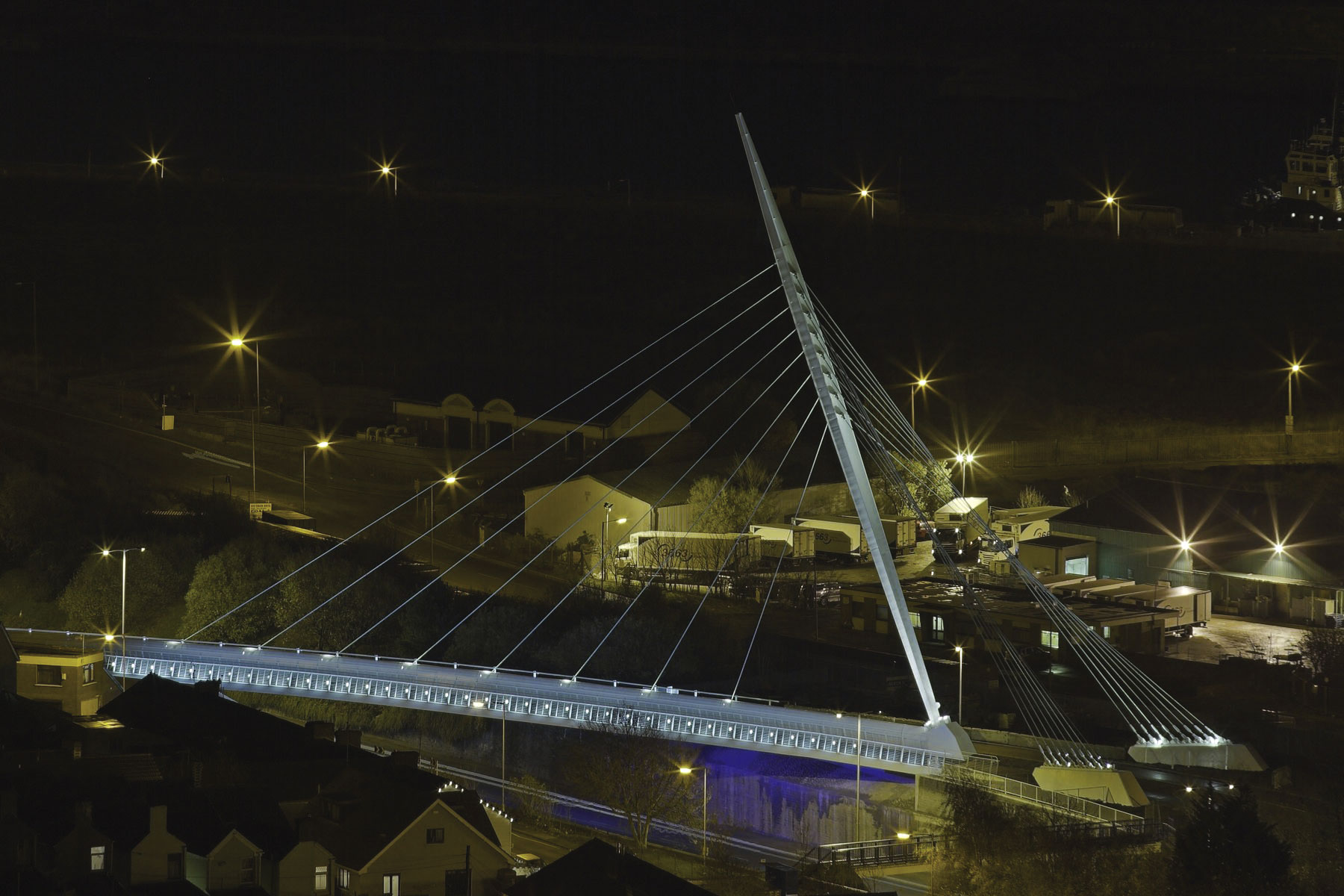 The Sidings Bridge is an iconic structure which carries a single lane carriageway, a cycleway and a pedestrian route over the A483 providing a dedicated bus route from a park and ride facility to the city centre.

With the consent of the client, Flint & Neill were employed by the main contractor Alun Griffiths to prepare a value engineered all steel alternative for the superstructure instead of a traditional steel concrete composite design.

Their key change was the introduction of steel orthotropic decks which would not normally be economic for a structure of this sort of span range. However, for this project the all steel deck offered a number of direct and indirect cost and sustainability benefits.

These included maximising offsite construction and minimising on site work over the live carriageways of the A483; the need for concreting over the road which would have required lane closures was eliminated; the weight of the steel deck and the axial load in the mast was reduced; stay sizes were reduced; and the spacing of cross girders was increased, simplifying the detailing of the spine beam.

The bridge has a 71m span at a skew angle of 65 degrees. The central spine is a torsionally stiff closed trapezoidal box section with 30mm thick flanges and 20mm thick webs.  Internal stiffening has been minimised so as to reduce fabrication costs, while cantilevered cross beams are bolted to the spine beams at 3.3m centres. The orthotropic vehicle deck is stiffened with 220mm deep bulb flats rather than trough sections to simplify fabrication. 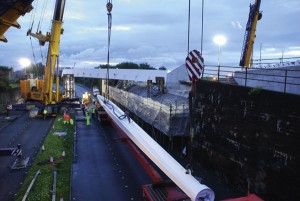 A slender mast cross section consists of five main plates in a ‘star’ configuration. The base of the mast is supported on a 750mm diameter nickel plated spherical bearing with a machined central locating pin. The back stays connect to an anchor block where a cast in frame was used to accurately set the anchor bars in position prior to concreting.

After fabrication a full trial erection of the central spine beam and deck units was undertaken at Rowecord’s works in Newport, South Wales, before being transported to site by road.

Temporary support trestles were provided in the central reservation and at the abutments to support the spine beam and deck units in the temporary condition. This enabled the two sections of spine beam to be placed in position, surveyed and aligned prior to on site welding and testing of the main box section site butt weld. In addition the abutment trestles enabled the quick release of deck sections from the main crane, which proved to be of benefit in the limited road closures.

The bridge steelwork was installed in two road closures over successive weekends. The first possession was used to install the spine beam in two sections, mast, and four skew corner deck units at the abutments.

After completion of butt welds in the central spine beam and the trimmer beams the second possession was used to install the remaining four larger deck units. These deck units were delivered to site in sections up to 25m long and were suspended by chain blocks from a lightweight modular lifting beam during installation.

On completion of the deck plate and stiffener butt welds the bridge was set on jacks at the abutments so that the correct permanent bearing loads could be established before the bearings were grouted.

Brian Williams, City & County of Swansea Team Leader Bridges and Structures, comments: “The new bridge crossing over the Fabian way represents an impressive landmark structure on the eastern approach to the city centre. Its appearance is intended to recognise the long standing maritime history of Swansea with the twisted backstay arrangement representing sails  supported by a forward leaning mast.

“The aesthetic and engineering qualities of the structure have engaged the interest of bridge engineers internationally. Its innovative structural form is believed to be unique to the UK.”