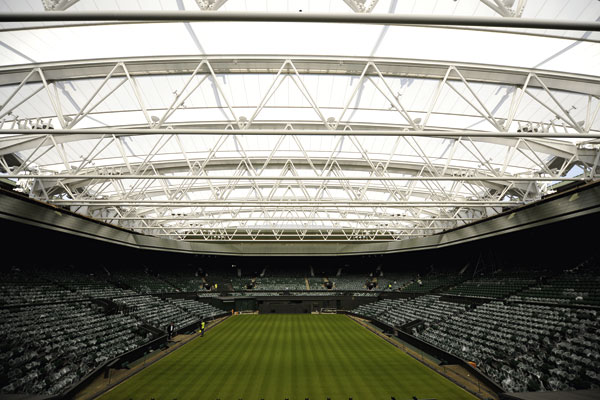 This year’s Wimbledon Tennis Championship will be the first to play undercover – if it rains – as a new retractable roof over the Centre Court has been completed.

The All England Club has confirmed that the roof is on schedule to be ready for the Centre Court  Celebration matches to be played on 17 May. These games will form part of the final testing procedure before the main championship begins on 22 June.

There are 10 trusses spanning approximately 77m across the court. The ends of each steel truss are supported by a set of bogies that move along parallel tracks positioned at either side within a new fixed roof.

In preparation for closing the roof, one section is parked in its folded state at the north end of the court while the other is parked at the south end. A coordinated electro mechanical movement moves the trusses apart and, at the same time, unfolds and stretches out the fabric between the trusses over the court until the two sections meet in an overlapping seam above the middle of the court.

The entire retractable roof has been designed to close in a maximum of 10 minutes. Steelwork for the project was fabricated and erected by Watson Steel Structures.