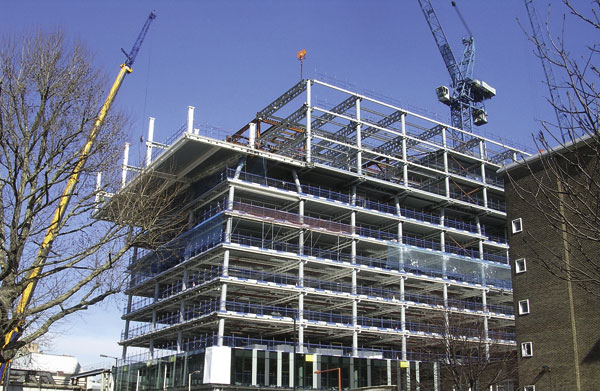 Palestra is a state-of-the-art 103,000m² 12-storey office building situated on the corner of Blackfriars Road and Union Street in Southwark, south London.

The building has received some substantial external treatment, which divides the building into masses, one box on top of another. The upper box, consisting of the top three stories, cantilevers 1.5m beyond the lower one on three sides – and by 9m overhang on the fourth side, facing Blackfriars Road.

Another interesting and highly visible architectural aspect of the structure is the way the building is supported by ‘dancing’ columns (inclined columns) on the ground and seventh floor levels.

These columns lean over at varying angles and in two directions, inducing horizontal forces at the top and bottom of each.

“We paired them so one leaning one way is balanced by one leaning the opposite way somewhere else,” says Buro Happold Partner Stephen Brown. “The balancing columns are not placed adjacent to each other so that this is not obvious.” 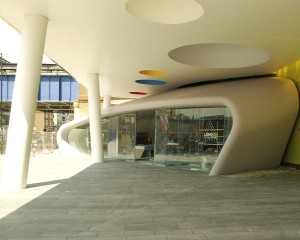 But even though this balances the horizontal forces, a twist is still imparted into the floor slab.

“Understanding the twist put into the building was an important part of the design,” says Mr Brown. “Both the ground and first floors have to work quite hard to hold the columns.”

Between the first and seventh floors everything remains vertical. Then there is another tier of two-storey dancing columns, compounded by the fact that at the ninth floor the grid changes from a 10m x 7.5m pattern to 12m x 7.5m because of the cantilever.

“None of the columns meet the columns above at all,” says Mr Brown. Moreover, the whole ninth floor is offset by 7.5m to the west. “It causes an interesting twist at the seventh level, plus an overturning effect at the cantilever.

To accommodate the changing geometry imposed by these ‘dancing’ columns and the various steps in the width of the building, while maintaining a total floor depth, an innovative solution combining double beams and composite columns was developed.

The solution adopted not only simplified the installation of the building services by fully utilising the cells through the beams, but also fully maximised the efficiency of the beams by using them in double bending.

Twin cellular beams span 12m and are arranged in pairs that pass either side of internal columns and as such the beams’ design takes advantage of continuity. By using the sagging moment capacity of the beams past the columns, yielded beams up to 35% lighter than otherwise would have been the case.

This headquarters building, on a strategic site south of the Thames, exemplifies modern intelligent office space of today, commented the judges. Within a challenging architectural concept, the engineers have rationalised the floor structures to minimise the depths by using twin floor beams, spanning continuously over two bays, with external cantilevers.