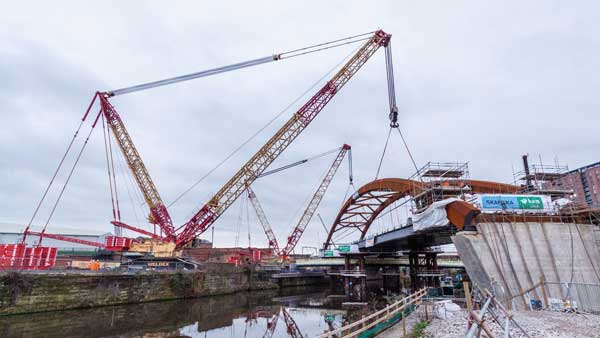 Weighing more than 600t, what is said to be the UK’s first asymmetric network arch bridge was successfully lifted into place last month by two of the largest cranes in the UK.

The two arches were initially assembled on-site from 12 weathering steel sections (six each side). Laid out flat they were both rotated into a vertical position after welding and placed on to temporary supports to allow the cross members to be installed.

In order to speed up the construction programme and lessen the amount of work to be done over the river, the steel composite bridge deck was installed separately and supported on temporary trestles in the river.

The arches were picked up and installed with a tandem lift using a 750t-capacity crawler crane in conjunction with a 1,350t-capacity crawler. They were then landed on to four bridge positions, one of which projects out over the River Irwell.

The bridge has an overall steel tonnage of more than 1,600t and is one of nine bridge structures Severfield is fabricating, supplying and installing for the Ordsall Chord.

The project, due to be completed in December, is being delivered by the Northern Hub Alliance that includes Network Rail, Siemens, Amey Sersa JV, Skanska BAM JV, AECOM Mott MacDonald JV as well as Severfield.