School for the future

Employing a steelwork contractor on a design and build contract has paid dividends on an innovative school project in Sunderland.

Sunderland City Council is working with Balfour Beatty Construction to design and build six new schools as part of the £120M first phase of its Building Schools for the Future (BSF) programme. The initial tranche of this scheme involves three replacement schools, Pennywell, Castleview and Washington.

Pennywell School is being constructed close to the existing school on former playing fields. Once complete, the old buildings will be demolished and the ground cleared to form new sports fields.

School buildings will also incorporate nearby Quarry View Primary School and it will become a 4-16 Academy and known as Academy 360. It aims to achieve Specialist Status in Business and Enterprise, working with other schools, the local community and businesses to provide effective vocational courses. 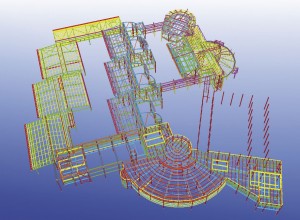 The City Council says the existing Pennywell buildings are not fit for the learning needs of the 21st century and the new structures will have improved access and layout, coupled with attractive dining and pastoral facilities.

The new school buildings are all framed in steel and have been designed, supplied and erected by Barrett Steel Buildings working on behalf of Balfour Beatty.

Chris Burns, Technical Manager for Barrett Steel Buildings, says working on a design and build basis for the steelwork package has a number of advantages. “We can review and look at ways to reduce the overall steel tonnage weight that a structural engineer would design by adapting our industry expertise suitably.

“By approaching a project this way we can then provide more sustainable members that are readily available. This in turn can generally mean less fabrication.”

The on site steelwork package has been divided into six phases, which have been dictated by the groundworks programme, other on site activities as well as ease of erection. Phase one, and as the number suggests, the first to be erected consists of an assembly hall and some connected administrative offices located on two levels.

This building is 10m high, 39m long and features 15m clear spans over the assembly hall. The perimeter columns are CHS members and forming the hall’s spans are a series of glulam timber beams which Barrett Steel Buildings has also erected.

The choice of glulam beams was purely architectural as they will remain exposed and they were pre-drilled before being erected. The beams sit inside a saddle which is placed on top of each perimeter column. Each saddle to beam connection has 12 bolts, but a threaded bar through the glulam beam actually takes the load.

On the top of the connected office wing an extra floor for plant has been incorporated into the design. “This was a late requirement from the client and again shows the advantages of being a D&B contractor, as we were able to quickly alter the steelwork design and incorporate the floor,” explains Mr Burns.

Stability for the phase one structure is provided by bracing positioned in the roof as this is the only place it could be put, adds Mr Burns.

An interesting element of the construction phases is that they are predominantly designed as individual structures, able to standalone while other phases are being built. “A couple of phases are connected, but four phases are structurally independent,” explains Mr Burns.

Next to the phase one building phase two consists of a single storey classroom block. The structure has a central corridor and the eaves of the pitched roof on either side slightly overhang. Here Barrett Steel Buildings has designed and installed 203 x 203 x 46 columns which are situated along all of the overhanging eaves to which easi-edge protection has then been attached.

“You can’t attach edge protection to purlins,” explains Mr Burns. “So by installing beams along all overhanging areas we fulfill our CDM requirements by making it easier to install the safety system.”

Attached to phase two is phase seven, another classroom block. This phase will be the last zone to be erected as it will effectively close in the school’s inner courtyard. During construction this area is a major access point for machinery and deliveries. 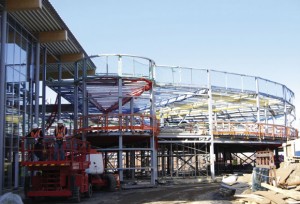 The curved frontage of the school’s entrance block

Phase three is positioned opposite phase two and is a two storey classroom block which incorporates a curved roof structure on the outer elevation. Formed with raking members the structure slopes from the building’s central walkway and lower down it effectively becomes the outer wall.

Adjacent to three is the entrance block (phase four) which incorporates a rooftop rotunda. This structure also connects back to phase one, and so completes the school’s roughly rectangular shape.

The main entrance area is a two storey building which has a 45m curved frontage, formed with straight beams at the front of each segment shaped bay and infilled with curved feature members. Within the curved entrance there is a rotunda which connects into the outer curved grid.

“This was the most difficult area to design and the setting out took a long time,” says Mr Burns. “There are so many raking members, which are all different, while the rotunda is a raised semi circle with even more curves.”

Pennywell School also includes two other stand alone structures which will be connected to phase three via steel pedestrian walkways. Phase five is a sports hall with 20m internal spans, and constructed like a traditional braced warehouse.

Phase six, the last structure to be erected on site, is two independent buildings linked by an external walkway. One block consists of three storeys of classrooms, while the other is a drama theatre.