Much ado about steel 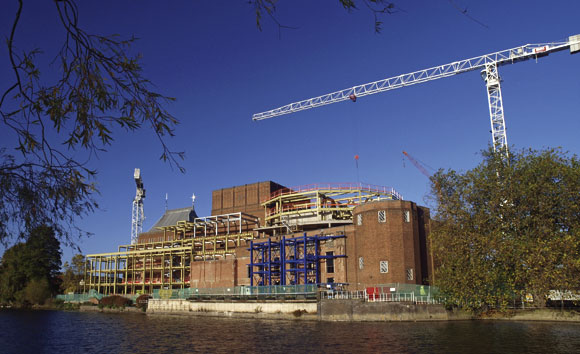 The world famous Royal Shakespeare Theatre at Stratford-Upon-Avon is undergoing a complete transformation with a new auditorium under construction and restoration of its valued heritage elements. The project will create the best theatre for Shakespeare in the world, writes Martin Cooper.

The Royal Shakespeare Company’s (RSC) ambition is to create the best theatre for Shakespearian plays in the world, with a contemporary interpretation of the courtyard stages of the Elizabethan era. At the heart of this historic project is a new auditorium featuring a thrust stage which will jut out into the audience, reducing the distance between the paying public and the actors.

This new auditorium will replace the 1932 theatre which featured a ‘picture frame’ stage layout (owing more to cinema than theatre design) and is also being constructed on the same footprint.

Although the construction of the new 1,030 seat auditorium is the main element of the overall works, other important parts of the project include the restoration of the Grade II listed Art Deco foyer, fountain staircase and front and riverside facade. Work underway also delivers expanded public areas, new and better backstage facilities, and a viewing tower marking the theatre’s new entrance.

“We want to move away from the 19th Century proscenium design to a theatre which celebrates interaction. Our commitment to bring an immediacy and clarity to Shakespeare means we need to bring the audience to a more engaged relationship with our actors. The best way we can achieve this is in a bold, thrust stage, one-room auditorium,” explains RSC Artistic Director, Michael Boyd.

Many construction projects are undoubtedly run of the mill and their like come along on a regular basis. Others are one offs and those lucky enough to work on these projects know they are involved in something which comes along once in a lifetime. The transformation of the Royal Shakespeare Theatre (RST) is most definitely one of the latter. 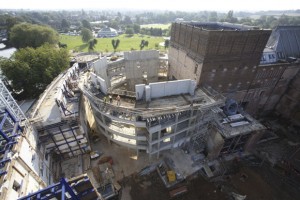 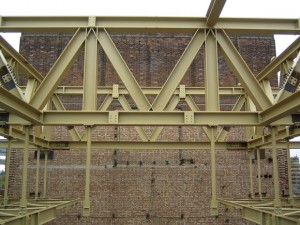 Two 24m long trusses part form the new auditorium’s roof. They are 3.5m deep and can support up to 25t of scenery 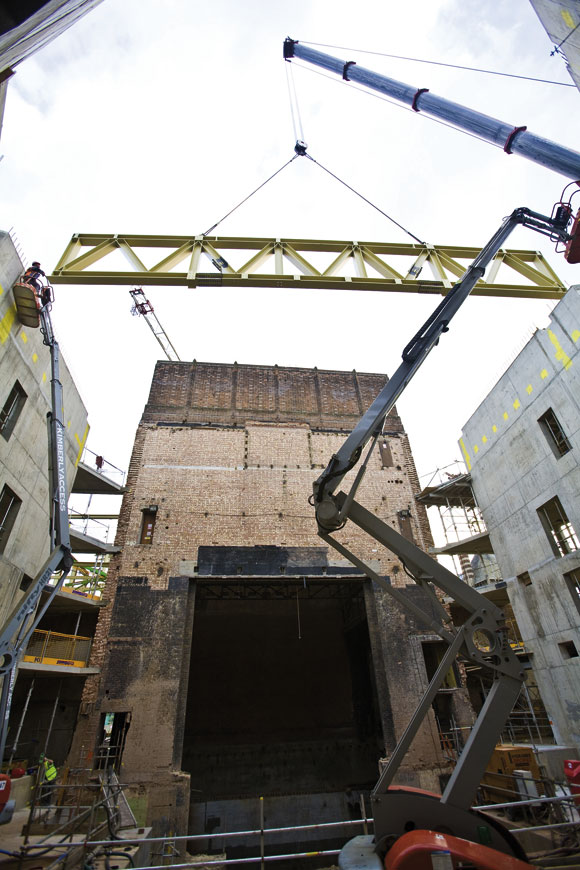 Extensions and alterations have previously taken place at the RST, but work has usually happened only once or twice in a lifetime. Although there has been a theatre on the site since the 1880s, the main building dates from the 1930s with a few extensions dating from the 1950s. These Post War extensions have recently been demolished and the theatre has been stripped back to its 1930s build.

“It’s an incredibly complex project,” explains Andrew Wylie, Associate for Buro Happold. “We’ve had to look at which parts of the building are staying up, which are coming down and importantly will it stand up. How do we keep the retained bits of building safe during the construction?”

The new auditorium sits in between the retained theatre fly tower and the 1930s Grade II listed Scott Foyer. There is little room in which to work and to add to the overall complexity either side of the new auditorium two new wings are also being erected.

Structural steelwork is being used on a number of key elements and the most striking are the roof trusses which span the new auditorium. The two main trusses are each 24m long x 3.5m deep and weigh over 30t each. They were brought to site in three sections and assembled on site before being lifted into place.

This wasn’t as easy as it sounds, as access to the tight site is limited. With other work going on around the site, steelwork contractor Billington Structures had to bring in a mammoth 500t capacity mobile crane to lift the trusses.

“Anything smaller wouldn’t have had the necessary reach, as we couldn’t get that close to the auditorium,” says Mr Hayes, Billington’s Project Manager.

The trusses are meaty sections and the bolts alone have a combined weight of 2t. They need to be solid and have been designed to have up to 25t of scenery hung from them. They also support a hanging technical gallery which will be used for lighting and sound equipment, plus two hung floors over the auditorium.

The two trusses are supported by the new inner concrete walls of the auditorium and are connected by a series of steel support beams. These are then connected to new steelwork which will form a new roof over the entire renovated building.

Along the riverfront elevation of the building a new four storey wing is being erected. This will house dressing rooms and a top floor (roof top) cafe for the company. Here the new steelwork is connecting back to a retained facade.

These retained facades consist of load bearing masonry and the new steelwork is supported on pad stones inserted into the walls.

Keeping the weight down of the new steel structure, and consequently the loads transferred to the retained facades, led the design team to specify timber planks for the new wing’s flooring.

“These planks are lighter than concrete so we were able to get an extra floor to the structure and have a lighter steel frame and foundations,” says Mr Wylie.

The project has a number of sustainability credentials, not least the choice of materials used. “We’ve used materials that are best for each section of the project,” adds Mr Wylie. “A steel frame is lighter than alternatives for the new additions.”

The steel wing structure also includes a 10m long Vierendeel truss which picks up the rooftop cafe’s canopy. This section weighs 10t and was brought to site in one piece and lifted into position by mobile crane.

On the town side of the building, another new four-storey steel framed wing is also under construction. The lower level of this structure will have a colonnade from the theatre’s new entrance with a series of exposed feature columns.

One of Billington’s final pieces of steel erection will also be the most complex and potentially tricky. Within the retained fly tower, which is located behind the new stage area, new steelwork for walkways will be erected.

“Access to the fly tower will be limited so we will have to lift steel through a 3m x 3m opening in the tower’s roof,” explains Mr Hayes.

Columns will not be a problem, but the internal trusses will have to be spliced and lifted into the tower in small sections, which promises to be a time-consuming procedure.

Recently, the development of the RST has been included in a list of the 20 best historic development schemes across England. English Heritage praised both the design team and the RSC for creating a modern design while preserving the Stratford-Upon-Avon theatre’s historic features.

“A job like this is once a century,” says Mr Hayes. “Being involved in a project that is so historically important is something to be proud of.”