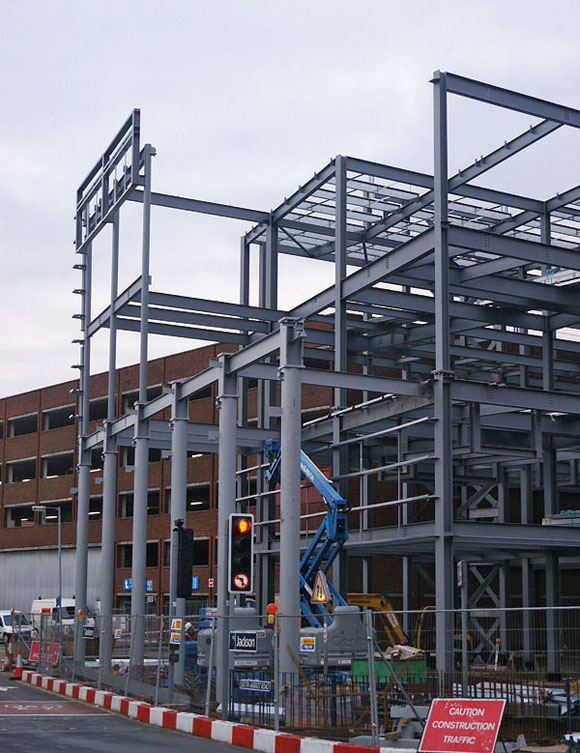 The site is hemmed in by roads, the existing shopping mall and a car park.

A shopping centre extension, spanning bus lanes and a main arterial road, has required a phased steel erection programme in order to keep the highway partially open to traffic throughout construction. 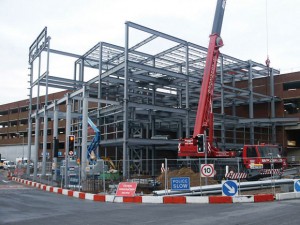 The site is hemmed in by roads, the existing shopping mall and a car park.

The East Anglian seaside resort of Great Yarmouth is popular with holiday-makers, but as yet it isn’t renowned as a Norfolk shopping destination. This is about to change as a result of the £7.8M Market Gate project, which will be completed later this year.

The scheme got underway in early 2007 and consists of a major redevelopment of the town’s existing shopping centre which will add an additional 6,000m2 of retail space, with high profile tenants such as Debenhams, New Look and Iceland already signed up.

The first phase of the project consists of a four-storey extension erected adjacent to the old shopping mall. This part of the new structure will link directly into the existing mall and is the only part of the new build with a ground floor.

Ian Burchnall, Contracts Manager for D.A. Green & Sons, explains: “The rest of the extension has two-storeys and will be built over three traffic lanes used as a bus station terminus and an arterial road.

“This part of the job is extremely challenging and  involves a number of phases for steel erection, with some work needing day and night closures to the roads.”

D. A. Green completed the first phase of the steelwork package in November and this comprised the entire four-storey retail block and the steel structure over one traffic lane. 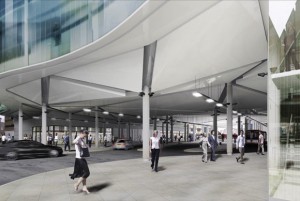 The ground floor of this part of the project has been pre-let to Iceland and speed of construction was critical as the client moves in this month (February) to start its own fit-out. Iceland will then vacate its site within the existing mall, allowing main contractor ISG Jackson to begin a refurbishment of the old shop.

The site for the initial phase of construction was previously occupied by an old emporium which was demolished early in 2007. An extensive piling programme was then under taken before steelwork erection could commence.

The majority of the four-storey structure was erected with a 7m x 7m grid pattern, using primary 533 UKBs and secondary 406 UKBs. “The pattern was dictated client requirements,” says Mr Burchnall. “While the ground floor does require some longer spans as Iceland wanted a more column free area.”

The front (north) elevation of the new structure will house a new entrance to the enlarged shopping mall and will have one row of perimeter 406mm diameter 12m-high CHS columns. These feature members will extend from ground level to the second floor. Behind this facade the first floor level is effectively a mezzanine floor and set back by 6m from the perimeter. As a safety precaution, and because these CHS’s are within metres of a busy road, they will be filled with concrete for added impact resistance.

The proximity of the existing building means the initial new build sector has a complex arrangement of cantilevers to take into account foundations and pile cap positions. 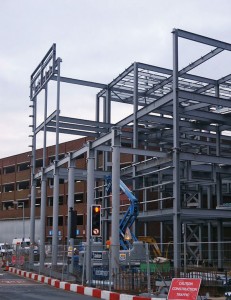 Feature CHS columns will be filled with concrete for extra impact resistance.

“We’ve had to pull in the column lines to avoid what’s already in the ground. The resulting structure has around 180 cantilever members,” explains Gary Farquhar, Project Engineer for Halcrow Yolles. “We were able to adopt a rationalised grid above first floor, but at ground level our footprint was restricted by the arrangement of the existing highways.”

While erecting the initial phase of the project D.A. Green did have the relative luxury of having a set-down area for steel deliveries. After this section of the project was completed, areas suitable for material storage will come and go as the road layout changes to allow the extension to be built overhead.

“As we got closer to completing the main block we had virtually no spare room left on site,” explains Mr Burchnall. “From now on we have a very tight programme, and we have to fine tune deliveries to fit in exactly with erection, especially the final phases.”

This will primarily be achieved by downsizing truck deliveries, from 24t to 10t loads per day. “This will ensure all steel delivered to site is erected that day and allows for minimal storage of materials on the confined site,” explains Andy Crunkhorn, D.A. Green’s Site Supervisor.

During January, main contractor ISG Jackson has been reinstating the one traffic lane which has been built-over. This is now open as a joint bus and traffic lane, while the other two lanes have been ripped up and piling work has begun, with the final steelwork erection phase beginning in April. 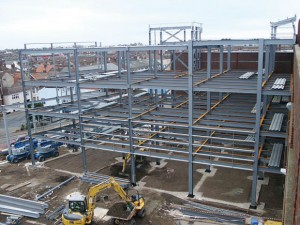 “To keep traffic disruption to a minimum we will erect the majority of the steelwork over the roads during the night,” says Mr Burchnall. “During the day two lanes will remain open, reducing to a single lane while we are working at night.”

The final stage of steel erection will also involve some of the largest sections being lifted into place. The majority of the bus terminus and road lanes are separated by two islands where structural 356 x 406 x 393 supporting columns will be placed. However, at the front elevation the road lanes splay outwards and there is a clear span of some 18m.

To support the new structure over this long span a pair of 1,200mm deep, 325mm wide fabricated plate girders will be erected. Each of these two sections will have 90mm deep flanges and weigh approximately 18t each.

The spans over the traffic islands are between 7m and 12m, and here 900mm x 325mm plate girders support the new overhead two-storey structure. These members were designed as continuous sections across multiple spans to keep depth and weight to a minimum.

More than 700t of structural steelwork will be erected during a phased construction programme.

Summing the project up, Chris Harrall, Director of ISG Jackson’s Commercial Division, says: “The challenging site conditions that we are encountering at Market Gate demand a robust and highly detailed programme of works. Allied to a restricted and busy site location, we are working above a key arterial route into the town centre and need to deliver a phased project to meet specific requirements of retailers. We are confident that once completed, the enlarged centre will attract increasing footfall within Great Yarmouth ensuring it becomes a true regional shopping destination.”