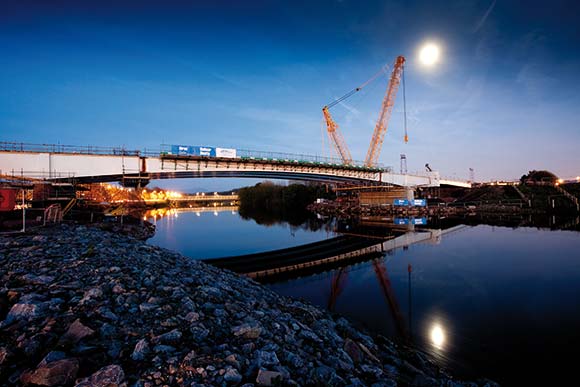 Three years after its calamitous collapse Workington’s Northside Bridge has reopened with steelwork playing a pivotal role in the re-spanning of the River Derwent.

The original Northside Bridge collapsed during the devastating floods of 2009. The effects of this deluge were immense and, as far as infrastructure is concerned, this part of Cumbria has now fully restored its main links with the reopening of this vital bridge that carries the A596 across the River Derwent.

The new 152m long three span composite steel bridge has been erected in the same position as the former structure. It is supported on concrete piers with bored pile foundations and clad in sandstone, some of which was recovered from the original bridge.

“Steel offered us a number of benefits, one of which was speed of construction,” says Alan Webb, Capita Symonds Project Manager.

Main contractor Birse Civils started on site during August 2011 and completed the programme in a little over 14 months, achieving one of the client’s main objectives – namely having the new bridge open within three years of the original structure’s demise. 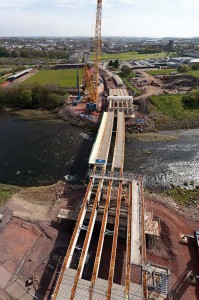 Early works for Birse included the removal of the original bridge’s foundations and locating the service diversions. For the foundations a total of 72 bored piles were installed to a depth of 26m.

The structure’s two piers are positioned on both riverbanks, this design negated a lot of potentially hazardous working over and in water and resulted in a quicker construction programme.

But it was not the only reason for this design as Jason Dixey, Project Manager for Cumbria County Council, explains: “During public consultations about the construction of the bridge, local people made it clear they wanted something that looked robust and bearing in mind what happened to the old bridge, piers in the river did not seem appealing.”

Splitting the structure into three segments, the northern side of the bridge was erected during one weekend in February, followed a month later by the installation of the southern part.

The northern side of the bridge was comprised of six pairs of braced girders, three 30m long pairs and three 23m long pairs all incorporating the bridge’s haunch.

Spanning from the riverbank abutment, onto a pier and then over the river, temporary trestles supported the structure between the pier and the abutments during the erection process.

“Once all of the girders were installed, and the cross beams had been welded into place the trestles were removed as the steelwork was then stable,” says Phil Dilworth, Birse Civils Site Manager.

Two mobile cranes were utilised for this operation, one 700t capacity unit to do the three girder lifts, and a smaller 60t crane to install the cross beams.

The northern section spans the A596 and in order to install the steelwork the project team had a weekend possession in place from Friday night until Monday morning.

So successfully and quickly was the steelwork erected that the road was able to reopen on Sunday lunchtime – earlier than anticipated.

In a similar procedure the southern section, which is identical to the north, was then erected last April, leaving the middle 46m long mid span to be installed during May.

In order to avoid working in and over the river, the installation of the middle section was done slightly differently. 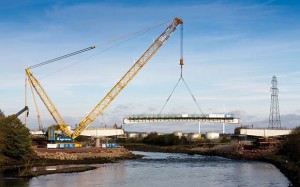 “We couldn’t put temporary trestles in the river so we had to weld the six pairs of girders into three long sections and lift them into place with a much bigger crane,” says Mr Dilworth.

Mabey Bridge brought six pairs of girders to the riverside site to make the centre 46m long infill girders, and over a period of four weeks they were welded into the required longer lengths.

The cantilevering formwork – used to form the deck – was also installed on the steelwork before the lifting process, minimising even further the amount of work that would have to be done over the river.

Birse provided an on site assembly yard adjacent to the southern abutment for this work.

Each of the three lifts needed to erect the bridge’s mid span weighed 160t, 88t of steel and the remainder consisting of formwork. To do this work a Demag cc2800-1 crawler crane was needed. This unit has a lifting capacity of 700t, 60m long boom, a 180t counterweight and took two days to assemble on site.

“Installing the final sections of the bridge girders was a key moment in the delivery of the project. It was also significant in this case as it re-established the connection between the north and south banks of the River Derwent,” sums up Mr Dilworth. 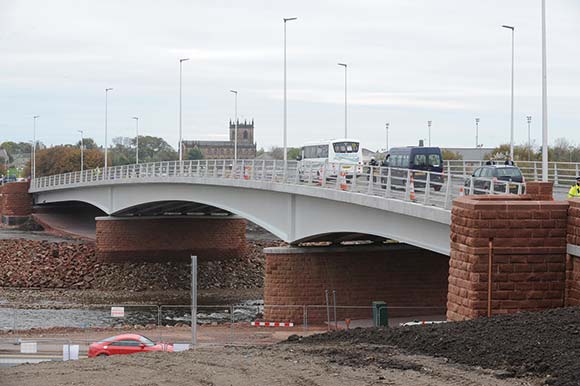 The bridge was opened by HRH The Princess Royal last October