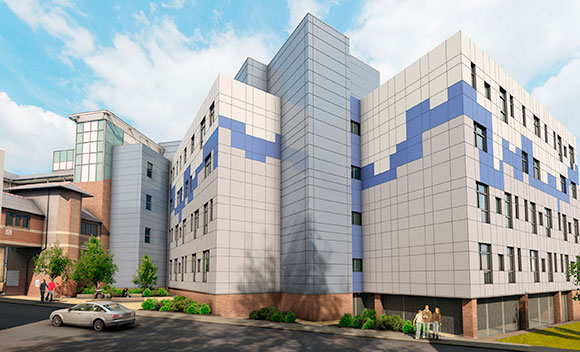 Flexibility and speed of construction were crucial factors in the decision to use structural steelwork for a new extension at the Royal Oldham Hospital.

Construction work is progressing on schedule for a new women’s and children’s facility at the Royal Oldham Hospital in Greater Manchester. Consisting of six floors, the new steel framed extension will include operating theatres, delivery suites, post natal wards, outpatients, an A&E unit and a 30 bed assessment unit. Overall the new build has a floor area of 10,158m² and includes shell space for future developments.

This is the fourth project main contractor Vinci Construction UK (IHP) has undertaken at the hospital.  Previous work, included the reconfiguration of pathology services at the Royal Oldham site, including the construction of new state of the art facilities and refurbishment to the existing pathology building, a three-storey build of an ambulatory radiotherapy centre and the construction of a new women’s and children’s department at North Manchester General hospital as well as, the configuration to the existing A&E and X-ray departments while remaining operational. The current work also includes a fair amount of refurbishment, with 2,700m² of existing first floor wards and hospital corridors adjacent to the new extension being modernised. 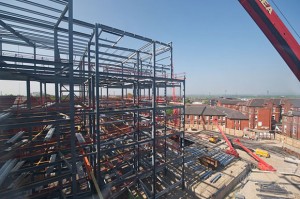 The top floor of the extension accommodates a plant area

Work on the extension began early last year and it has faced the usual challenges of projects on confined sites and being in close proximity to the general public. The refurbishment works will be undertaken while the hospital is fully operational and as with the main construction programme to erect the extension, has had to proceed with a great deal of planning to limit disruption to patients and visitors alike.

Using structural steelwork for the extension’s main frame has helped with its speed of construction, which meant fit-out and internal works were able to kick-off before the 14 week steelwork programme was even completed.

“Speed of erection was very important and the main reason for choosing steel for the structural frame,” says John Fowler, Vinci Construction UK Project Manager. ”Hospitals always have lots of services and this job is no exception. We wanted the internal fit-out to get started as quickly as possible.”

The site was formerly a car park and it is hemmed in on all sides by the hospital’s existing buildings. The tight confined site has little or no room for material storage, consequently all of the steelwork had to be delivered to site on a just-in-time basis.

Using its own mobile cranes for the erection process, steelwork contractor James Killelea divided the work into four phases, with each segment being individually constructed to full height, before moving onto the next area.

Prior to the steel erection starting, the sloping site required a cut and fill programme before a series of CFA piles were installed. Steel columns were then erected and sit directly onto the piled foundations.

Because of the site’s sloping topography, half of the extension’s footprint encompasses a lower ground floor, used as a plant area. Above, all of the other levels (ground,1st, 2nd and 3rd) cover the entire footprint, as does the 4th floor level which is a covered rooftop plant zone.

The extension is constructed around a central courtyard, which begins at ground floor level. The new structure is approximately square except for a skewed elevation which adjoins the existing concrete framed hospital. 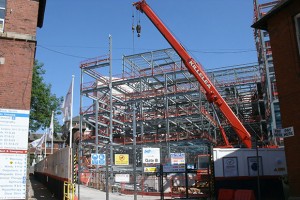 The site is extremely confined and surrounded by functioning hospital buildings.

The new steel frame is attached to the existing hospital along this elevation, but it is structurally independent. The steelwork abuts the existing concrete frame structure and there are two break-through points where the existing corridor enters the new extension.

Because of the numerous usages each floor level will house, the steelwork’s grid pattern changes, although it is predominantly based around a 7m x 7m configuration. The main columns were brought to site in 12m lengths and this meant the structure only needed one splice, located halfway up the building.

Even though most of the structure is fairly regimented in its construction, some floor configurations were modified at quite a late stage. “By using steelwork we had the flexibility to accommodate some design changes to the frame while the job was in progress,” says Peter Bryan Associate Partner at consulting engineers Alan Johnston Partnership.

The beam and column construction, with metal decking, uses the composite floor plates for diaphragm action along with vertical bracing to negate any sway issues. The frame also incorporates some deep voids, of 600mm in the theatres, to accommodate the large amount of necessary services.  These service zones are achieved by the shallow beam depths provided by the composite design.

K-bracing formed from RHS box sections gives the extension’s steel frame its stability. The problem the designers had was where to put the bracing, especially as the structure has a lot of windows – along exterior elevations – and numerous openings in its interior partitions. This dilemma was solved by locating much of it inside three large steel framed service risers.

The hospital extension will, as previously mentioned, be heavily serviced, so the necessary large risers, measuring 3.5m x 4m provided the perfect location for the project’s bracing.

Summing up, Mr Fowler says the project is on schedule and the steelwork erection, which was completed on time, has helped with the overall programme. “The quicker the frame goes up the sooner the follow-on trades can start and this was an important consideration when choosing the framing material for this project.”

The extension is due to be completed and open by the end of this year, while Vinci Construction UK’s refurbishment programme will be finished in 2013. 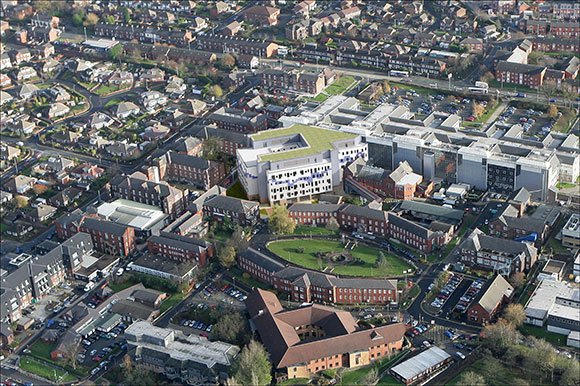