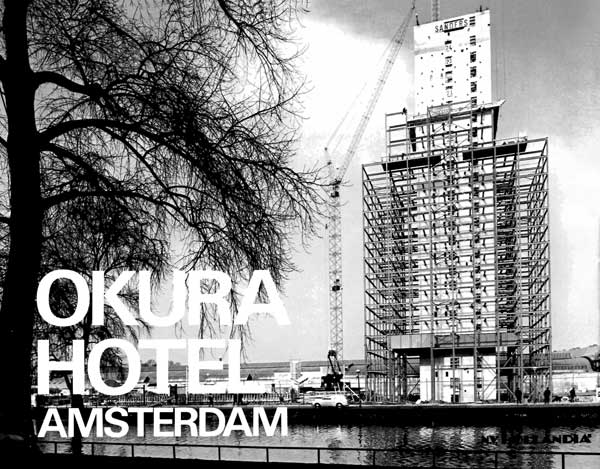 General
In addition to a group of large hotels in Japan, the Japanese Okura hotel concern has built a network of hotels throughout the globe. The increasing Japanese tourist traffic, in addition to the increasing number of Japanese firms being established in Western Europe, provided the reason for building the Okura Hotel in Amsterdam. In the NV Amsterdamse Hotelonderneming, set up for this purpose, KLM, Philips and Heineken are participating, in addition to the Okura concern. The plan of the building is shown below. 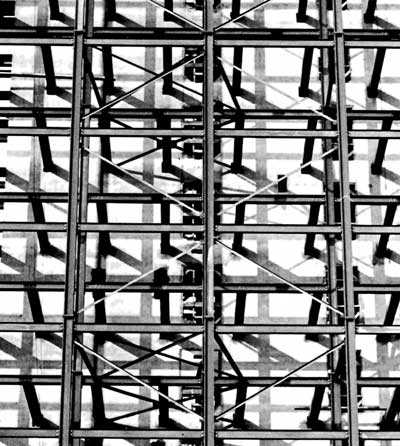 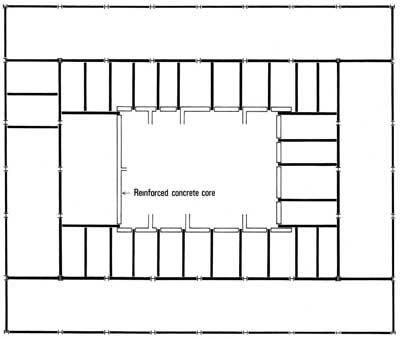 Plan (Not all steelwork shown) 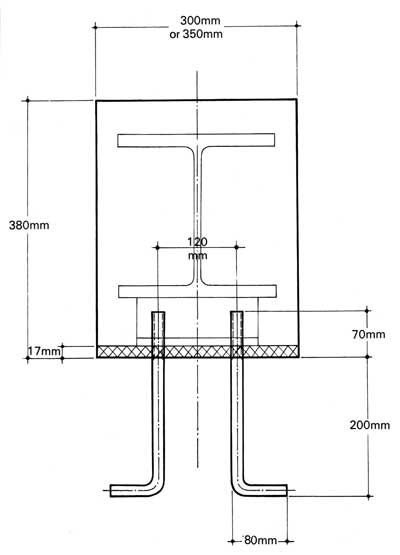 The hotel can be divided into three sections, as follows: The tower block, 80 m high (24 floors), The low building, 11 m high (3 floors) and an underground car park.

In the low building, there are offices, various large and small halls, conference rooms and kitchens, as well as three restaurants, Japanese, Chinese and European. A fourth restaurant with a French cuisine is situated on the top of the tower block. In the basement there is a shopping centre. From the third to the 21st floor in the tower block, there are 439 rooms with 840 beds and above there are the French restaurant and two service floors.

Constructional Details
The framework of the low building comprises concrete columns and steel beams encased in timber. The framework of the tower block consists of a concrete service core, erected by means of sliding shuttering, surrounded with an inner and outer ring of steelwork. The inner ring is linked to the core by means of steel beams, which support the concrete floor, while the outer ring is largely connected to the inner ring by the concrete floor alone. Until the outer concrete floors had been poured the inner and outer rings were braced together by means of temporary steelwork comprising light HE 100-A steel beams. Horizontal and vertical wind bracing was also provided until the concrete floors had matured sufficiently to stabilize the building. The inner and outer rings of steelwork are supported by columns which are, in general, continuous over three floors. The cap and base plates on these columns are accurately machined to provide perfect contact and ensure efficient transmission of force.

It was assumed in design that the compressive strain in the loaded columns over the full height of the building would be 25 mm, equivalent to 1 mm per floor. As a consequence, the steel beams between the concrete core and the inner ring of columns are supported on flexible seatings (see illustration, left) placed in pockets formed in the core. The floor beams were made composite with the in-situ concrete floors by means of connectors at about 50 cm centres.

In order to provide the longer spans over the three lowest floors, columns in the inner ring and one column in the outer ring were replaced by heavy plate girders. To provide the required fire resistance, these plate girders, and the columns on which they are supported, as well as the normal continuous columns up to the third floor, were completely encased in concrete. It may be mentioned that as a result, the steel portion of the column carried the load from the 3rd to 24th floor and the concrete portion the loads from the first and the second floor. In a similar manner, to provide fire protection and at the same time allow a continuous jointless floor to be laid, the steel floor beams were encased in concrete prior to erection.

Above the third floor, the columns were surrounded with 9 cm Porisosteen fire resistant bricks to meet the requirement of 4-hours fire protection. The steelwork was cleaned by shot blasting and given one coat of zinc rich paint. The total weight of steelwork, all of which is in mild steel, is about 1100 tons.

A special problem was brought about by the great difference in settlement of the tower block and the low building. This was solved by separating the two structures and providing a flexible strip, 5 m wide, between them.

Erection of Steelwork in the Tower Block
This was carried out with two cranes, one fixed on top of the concrete core and the other situated alongside the tower with a height of about 80 m. Before the actual erection began, a gallery was erected around the core which was supported by overhanging beams with counterweights. This gallery was used, among other things, to adjust and fix the seatings for the steel beams and attach the beams to them. At the same time, two working platforms were used, placed on the last floor and erected. From the third floor upwards, the columns were assembled in sections with their appropriate floor beams and lifted into position with a yoke. The two above mentioned working platforms were used to fix the beams into position. The concrete core was constructed in 23 days and the steelwork erected in about three months.