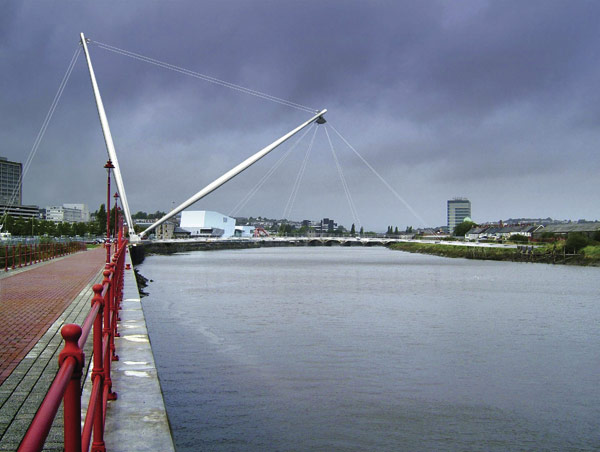 Rowecord Engineering began fabrication of a new footway and cycle bridge over the River Usk in Newport in mid-August. The £4.9M bridge is set to play a key role in the city’s regeneration, and will significantly improve access to the city centre from the east of Newport.

Newport’s new bridge follows the success of the River Usk Crossing, one of the winners in this year’s Structural Steel Design Awards. The foot and cycle bridge is aimed at linking the two sides of the city together, to create a sense of Newport on Usk rather than a city divided by its river.

The bridge consists of four crane-like masts up to 70m long, which are erected in pairs, both on the west side of the estuary. These masts will be anchored at ground level and supported by a total of 12 cables, eight of which will support the 145m long and 5m wide bridge deck. Assembly of the structure is due to start next January.

The design team was led by the WS Atkins special structures group in Oxford, with Nicholas Grimshaw & Partners providing the concept and design for the bridge. Rowecord, based in Newport, is subcontracted by Alfred McAlpine Capital Projects to build the structure, which will use 850 tonnes of Corus steel. The scheme is a joint project led by Newport City Council, the Welsh Development Agency and urban regeneration company Newport Unlimited.