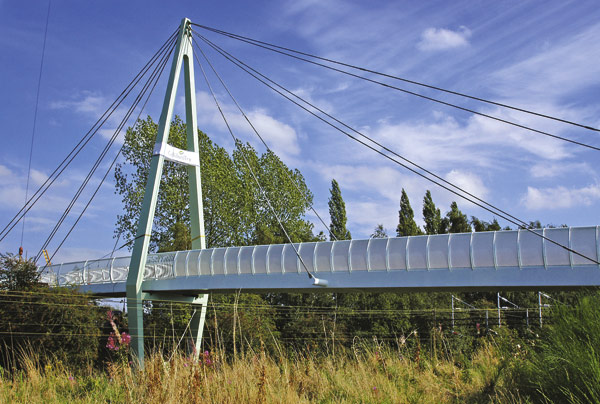 The first cable-stayed bridge over an electrified rail line is providing residents of Nuneaton with a safer pedestrian and cycle route across the West Coast Main Line.

The 70m bridge, which provides a route for schoolchildren living in Maple Park to primary schools in Whitestone, as well as a link to playing fields, has just had its official opening. It provides an alternative to an existing road bridge which has a narrow footway on only one side of the road.

The 105t bridge, including cable stays and 25m high pylon, was fabricated by Rowecord in Newport, working with Galliford Try. It was erected during a three-day closure of the West Coast Main Line.

Part of the funding for the £0.65m project was provided by sustainable transport charity Sustrans, as the bridge also forms a link in Nuneaton’s Green Track system and links to the National Cycle Network.