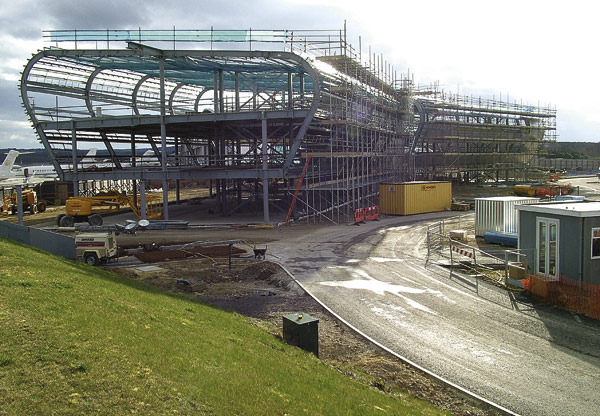 The terminal, which will be frequented by celebrities and business leaders, is the third and final project to come out of a design competition that the client implemented to bring avant-garde structures to the former MoD owned facility.

TAG took over the Hampshire site, once the base for the UK’s aircraft research industry, in 1998. Since then is has been successfully developed as a dedicated business airport serving south-east England, as well as hosting the biennial Farnborough Air Show.

Fittingly, the shape of the Reid Architecture designed terminal echoes an aircraft wing. It is formed by nine large steel hoops which support the complex geometry of the building envelope.

Rowecord Technical Director Paul Benwell said: “The form of the structure and its essential dimensions change on every plane.” Structural designer Buro Happold says that use of 3D CAD modelling proved invaluable in helping fabricators understand the complex geometrical issues.

Erection was completed in 14 weeks with a team of four men supported by a second team for the finishing touches. Fire protection is provided by intumescent coatings applied on site, supported by the secondary protection of concrete filled hollow section columns.