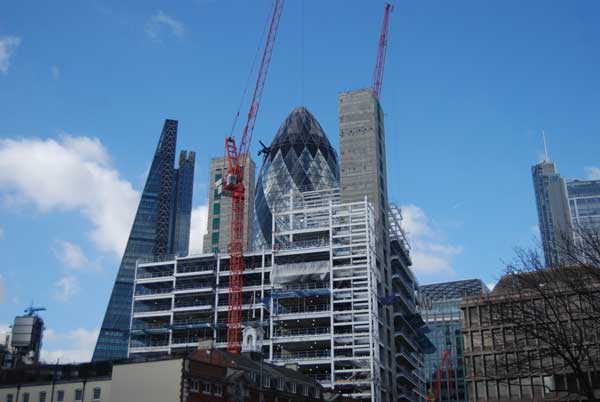 The total volume of office construction in London has increased by 28% over the past six months rising to 1.3 million m², the highest level since early 2008 according to the latest Deloitte London Office Crane Survey.

Since the last of Deloitte’s twice yearly surveys at the end of 2015, fifty-one new schemes have started, the highest number in its 20-year history.

The largest number of new schemes was in the City where 26 projects started. This is the largest amount of new construction activity recorded in this submarket, higher than in 2011 the year in which three tower schemes commenced, including the former Pinnacle site.

Elsewhere across central London, both the Southbank and King’s Cross submarkets recorded two new starts each, while The West End has seen 12 new starts.

Recognising that the low supply of available office space across central London offers a limited choice for tenants, developers have responded by starting a record number of new schemes since the last survey.

The survey states that the pace of development is rapid, with 38% of the space currently under construction scheduled to complete over the next 12 months.

This is partly the result of an increase in refurbishment projects, which account for just under half of the volume of new starts, and are typically quicker to complete than new-build.

Looking further ahead, the survey concludes that the geographic expansion of London’s key office markets is set to continue as new business districts are established.