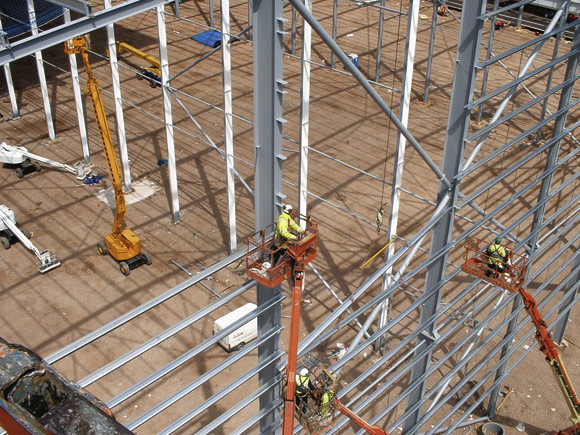 Demand for large portal frame sheds is buoyant in the UK. The typical project is increasing in size and steelwork contractors have plenty of work. The market shows no sign of peaking, particularly as far as large distribution warehouses are concerned, with developers increasingly working with the construction industry to find ways of erecting the buildings in ever-shorter timescales.

“The market for industrial sheds is operating with a very high level of demand,” says Bob King, business development manager of Billington Steel Structures. “Some major contractors are pre-booking work with us down the line. They’re aware the market is warming up and making sure they can get their projects built.”

Steel frames already account for over 96% of the market for single storey industrial buildings, according to figures for 2004.

Mr King says the biggest area of work at the moment is large distribution sheds, though there are also a lot of retail projects on brownfield sites which tend to be smaller because the sites themselves are more compact. “They’re typically 20,000sq ft rather than 200,000,” he says.

Richard Fitzpatrick, commercial director of Gazeley, one of Europe’s biggest developers of distribution warehouses, says that the size of the typical project is on a rising trend. “Ten to 12 years ago around 100,000sq ft was typical. The trend now is to a standard size of 220,000 to 400,000sq ft or bigger.”

Andrew Marston, commercial manager of Barrett Steel buildings, goes even further. “A few years ago half a million sq ft for a big retailer was unusual. Now a million sq ft is not unheard of.” A recent Barrett project for Debenhams in Peterborough was 762,000sq ft.

It might be thought that demand for regional distribution warehouses would be limited on the grounds that the number of supermarket, retail and DIY chains that need developments of this size is relatively small, but this is not the case, says Mr Fitzpatrick. 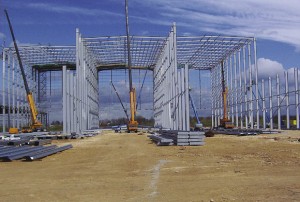 “Retailers and other businesses are outsourcing their distribution to third party logisticians or strategic partners such as Exel and TNT. In a number of cases these partners are then requiring units either for specific contracts or sites for multiple customers where there are economies of scale from running more than one contract from one unit.” He adds that contracting-out of logistics is a continuing trend in the UK, which already has the highest level of outsourcing in Europe.

This trend is fuelling the growth of a market for speculatively-built sheds.

Barrett’s Andrew Marston says: “Two years ago there was very little spec-building. Now there are several big developers who are speculatively building units of up to half a million sq ft. The demand is definitely there.”

Along with Gazeley, the biggest developers in this field are Astral, ProLogis and Rosemound. In a typical year Gazeley undertakes eight or nine major projects in the UK and in 2004 constructed 10M sq ft of warehouses.

Mr Fitzpatrick estimates that between two-thirds and three-quarters of new space transactions in 2004 were speculative premises. It reflects the fact that a logistics firm will want premises quickly when it wins a new contract, and that planning consent in the UK is taking longer than it used to. “Logisticians prefer units that are complete or coming out of the ground,” he says.

In turn this has led to developers devising systems to compress the building process. Gazeley has G-Track, first used on a TNT site in Lutterworth and its Magna Park in Arras, France, where it built a 22,000m² unit in 14 weeks.

G-Track involves assembling a construction team consisting of suppliers — engineer, architect, steelwork contractor — with whom the company has worked in the past so that there is a good working relationship between all the parties. “We rely on their input to each stage of the process to get better co-ordination between the activities and trades,” says Mr Fitzpatrick.

As far as possible elements are prefabricated off-site. Typically dock units and firewalls will be precast. Even office walls may be precast instead of using blockwork.

As far as the steel frame is concerned site work is eliminated as far as possible with any fixings fitted as far as possible in the factory. The co-ordinating role is nominally taken by the main contractor, but the steelwork contractor inevitably has a large role to play. In general it is up to the steelwork contractor to work out where purlins can be omitted to leave room to crane materials into place and programme the job so that these areas can be finished later.

ProLogis’s ProShed system is a different approach. G-Track allows a one-off building to be constructed more quickly, but still relies on an essentially traditional system of construction, though with more effective co-ordination between the trades.

ProShed is designed as a modular system from which pre-designed elements can be chosen and fitted together as needed for a given design.

“ProShed is engineered to be quick,” says Barrett’s Mr Marston, who worked on the first ProShed development in Daventry, Northamptonshire. “It slashes the development time, and you can build it even in bad weather or when daylight is short.”

Meanwhile, Billington’s Mr King says another source of work for the company is for retailers who want mezzanine floors adding to existing sheds. “Companies such as Asda, Tesco and Sainsbury are typically putting restaurants, clothes and other non-foods upstairs,” he says.

The most dramatic example was the short-lived Marks & Spencer Life store in Gateshead. This had a mezzanine with an elliptical space in the centre, which allowed a full-size house to be built to showcase the products on sale. Billington has a number of other mezzanine projects under way at present.

The next development on the horizon could be the true multi-storey shed, in which lorries can drive directly up to the upper storeys to make deliveries, like a multi-storey car park. The idea originates from Asia and has been enthusiastically espoused by Tim Wheeler, chief executive of the UK’s biggest industrial landlord, Brixton. Brixton recently took a group of architects and engineers out to Singapore to see some real examples. The developer may experiment with a two-storey shed initially. BAA is understood to be interested but does not want to pioneer the idea.

A major furniture retailer is known to be seeking planning permission in the UK for a store with lorry ramps to the first floor, but it is not yet clear whether other developers are enthusiastic.

“It’s a very interesting idea but we haven’t researched it in detail,” says Mr Fitzpatrick. “It will come down to the cost of construction versus the additional space. Most of our jobs are on the edge of town, where space is not tight.”

Barrett’s Mr Marston adds: “We’ve been talking to a developer, but the numbers don’t stack up yet. They will only work in specific areas, such as the south east near Heathrow. The steel content and development costs are higher so they will only be economic where rent and land costs are very high.”

For the time being it is likely that the current trend towards bigger distribution centres and shorter construction times will continue. And that will give steel contractors plenty to do for some time to come.

ProShed made to measure for Wetherspoon 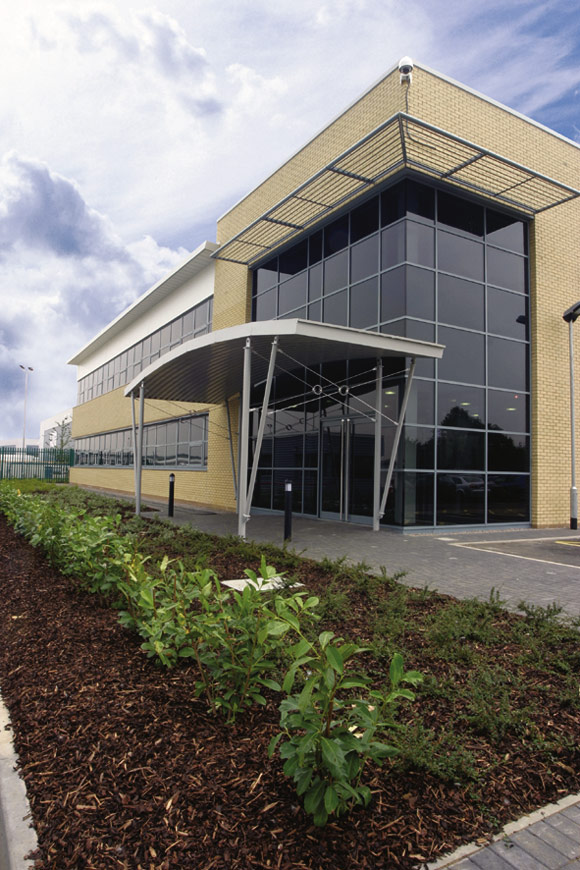 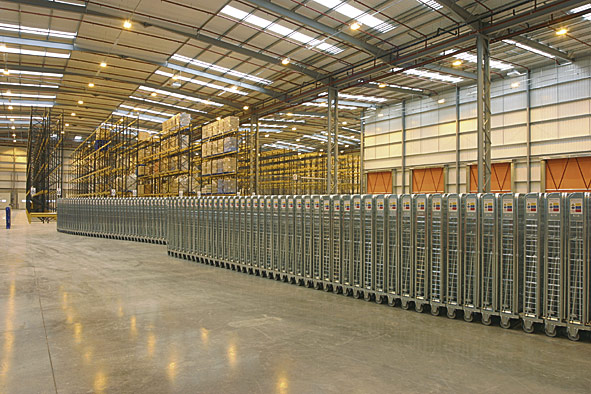 But the client required a considerable area of cold storage and it became clear that fit-out would take some time because part of the interior would have to be excavated,

Instead it proved quicker to build a new shed from scratch, using the modular ProShed system.

ProShed had been devised over a 12-month period by a team brought together by ProLogis, including Barrett Steel Buildings and Burks Green as architect and engineer.

The team brainstormed all aspects of shed design and construction and in particular looked at causes of delay. They engineered a modular system for both the warehouse and office elements, allowing a bespoke building to be put together from pre-designed standard elements. Construction is speeded up dramatically by virtually removing design and lead-in times and drawing costs.

ProShed is based on a matrix grid, and can be of any size. The steel grid is designed to cater for all wide and narrow aisle racking layouts. Offices too are modular, using a steel and precast panel design.

A new safety handrail solution, which slots into brackets on the structural steelwork, allows vertical and roof cladding to start simultaneously. Conventionally, the handrail is fixed to the side rail system, meaning that vertical cladding cannot begin until the roof is completed.

Steel instead of concrete ground beams are used for economy, speed and easier integration of other trades.

The 175,000sq ft, £3.8M distribution centre took only 50 working days or 10 weeks to construct, tailored to Wetherspoon’s specific needs, at no extra cost compared with a conventional shed.

New direction at The Junction 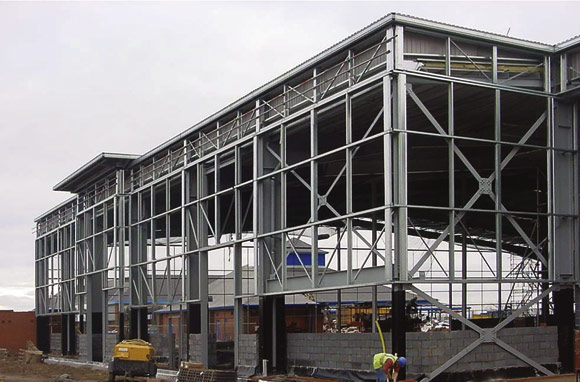 Caunton Engineering is steelwork contractor on The Junction Retail Park project in Hull, being developed by Simons Estates.

The area is being developed into a large retail site on what was originally a leisure-based complex centred on a Mega Bowl bowling alley.

The structure is a 51m span portal frame 230m long, providing 10,990m² of floor space, and comprising 700t of steelwork. The project’s first phase was completed earlier this year. Caunton is responsible for steelwork design and supply, with Simons Construction, a sister company of the developer, leading the design and build contract. Prospective tenants include Currys and PC World.

Ardra is easier for Atlas Ward 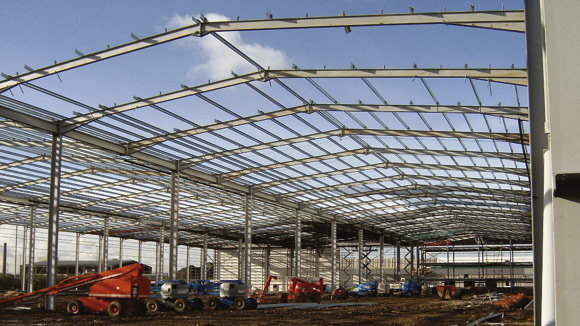 The fact that the Ardra Road project in Edmonton, Hertfordshire, consists of two distribution sheds made co-ordinating work with other trades simpler for Atlas Ward Structures. Typically the steelwork contractor will erect the main frame, fit purlins and side rails as far as possible, and then leave the cladding contractors to get on with their part of the job. Usually the side rails can only be fitted above 8m if precast ground beams are used, to allow them to be craned in. On multispan sheds, an area of roof purlin may have to be omitted to allow the crane used by the cladding contractor to reach through the roof to deliver materials.

All this means a return trip by the steelwork contractor to complete these areas, and possibly another to finish details such as the gatehouse and any external canopies and sun-breaks which have to wait till all the cladding is complete.

Atlas Ward project manager Andrew Bramley says of Ardra Road: “Because there were two units on the job we only had to come back once. It was like two contracts with a slight lag. We were able to move to the second building while the cladder was working on the first, then go back to unit one after the precast ground beams were placed.”

Unit one is a small twin span structure with two 34m bays, 105m in length with an in-built office. Unit two is larger with three 32m bays, 173m long, and offices at one corner, partly inside and partly outside the main shed. Atlas Ward played a key role in drawing up a programme to co-ordinate work by the different trades within an overall programme of 11 weeks. “We developed a programme to show where the cladder could go in — it’s something we’re used to doing — and then thrashed out the details with everyone around a table. You have to have a flow between different subcontractors working in the same areas.”

The Ardra Road site is situated off the A10, two miles from the M25 and also close to the A406 North Circular Road. Developer is Prologis (though not using the ProShed system) with Fitzpatrick as main contractor. The larger, speculatively built unit covers 16,750m². The first is to be occupied by a leading furniture retailer. Overall value of the project, which should be fully operational by the end of May, is £1.2M. 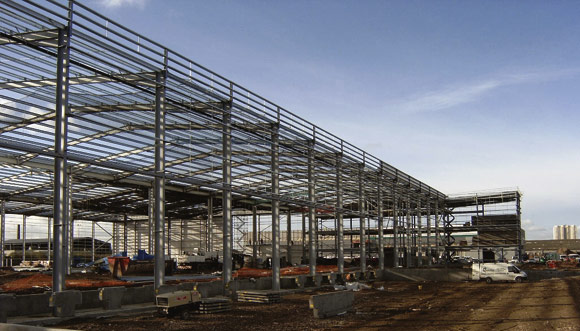