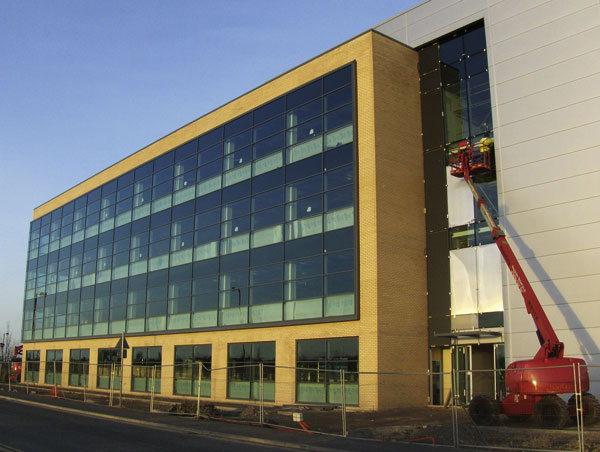 What is claimed to be the UK’s largest office park is taking shape on the northern outskirts of Newcastle-upon-Tyne.

Cobalt Park will eventually offer 2.25 million square metres of modern office space and create over 10,000 new jobs in the region.

Working for contractor Bowmer & Kirkland, Caunton Engineering has fabricated and erected steelwork for three office blocks on the site.

During early 2006 Caunton’s initial involvement with the project was the erection of Cobalt Units 13B and C.

These two three-storey office blocks are joined by a central atrium and both incorporate 18m spans broken by a central 300mm asymmetric section beam (ASB) which carries the pre cast floor slabs on the bottom flange.

Denis Morton, Caunton Project Manager said the ASBs were configured such that there is an attendant reduction in the thickness of the floor depth, and hence a lowering of the overall building’s height.

Last year Caunton also completed the four-storey Cobalt 14 office block. It is due to start erecting Cobalt D this month, a four-storey ninety-degree angular shaped structure with a central atrium.