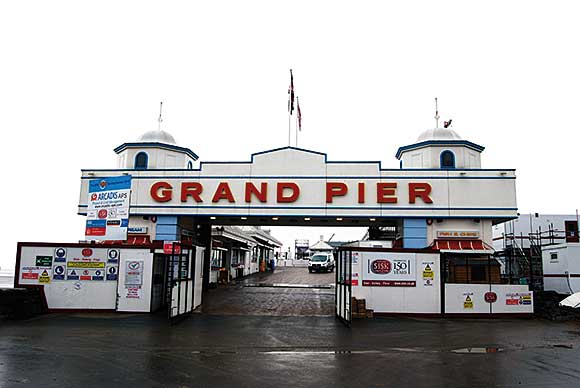 The Grand Pier at Weston-super-Mare will reopen this summer following a rebuilding programme after much of the original structure was damaged by a fire in 2008. Martin Cooper reports.

Cranes on board barges erect the steelwork for the pier . They are too heavy to work directly off of the pier’s deck

Nothing quite sums up or encapsulates the traditional British seaside as much as a pier. These iconic structures which jut out into the briny and offer everything from amusement arcades to concert halls and candy floss stalls to genteel promenades adorned with deckchairs are unfortunately not as common as they once were.

Since their Edwardian heyday many piers have fallen into disrepair or have even been demolished altogether, while others, most notably Southend, Southwould and Cromer live on as attractions enhancing their towns.

A fine example of the latter was the Grand Pier at Weston-super-Mare, Somerset which until a devastating fire in 2008 was one of the UK’s best preserved and well known piers. Originally opened in 1904, the pier was supported on some 600 piles and stretched some 400m into the Bristol Channel.

Disaster was not unknown to the pier as fire had struck before in 1930, when its original theatre was gutted. When it reopened after three years renovation a new pavilion housing a large undercover funfair had replaced the theatre and it was this structure which fell victim to the latest conflagration.

After the fire a design competition for a new pavilion was held during the latter part of 2008 and was won by Bristol-based Angus Meek Architects. Its design, incorporating a 90m-tall observation tower was approved by the local authorities in early 2009.

Commenting on the effort to get the pier rebuilt, Kerry Michael, Co-owner of the Grand Pier, said: “From the day of the fire there had been no question that we wanted to get on with the reconstruction straightaway, the pier is a symbol of the town and has been a major draw for generations.” 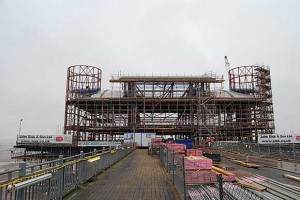 All materials for the project including steelwork, scaffolding and cladding are delivered via the waist which connects the new pavilion to the beach front entrance

Prior to reconstruction beginning and main contractor John Sisk & Son starting on site, a complete survey of the remaining original structure had already been carried out along with a clear up operation of the damaged wooden superstructure. The 250m-long walkway (known as the waist) which connects the entrance on the beach to the pavilion was undamaged, while only the piles and steel deck beams which once supported the pavilion remained at the end of the pier.

The original piles and deck beams were refurbished and now support a new deck, and a total of 84 new piles were driven to bedrock 20m below beach level to support the new pavilion superstructure. Basically all horizontal loads are taken by the old piles, which are laced together with horizontal ties and diagonal bracing rods. The vertical loads from the new structure are supported on the new piles.

“A lot of detailing had to be done on this part of the design,” explains Phil Ridge, Project Partner for W.A Fairhurst. “To accommodate the differential settlement between the original piles which support the deck, and only penetrate 5m or so into the soft silty clays which underly the beach, and the much longer stiffer new piles that support the superstructure. A steel collar and plate has been clamped around the new piles and bolted to the deck plates. This ensures that the deck can move differentially to the new piles while still providing lateral restraint.”

The new deck is an innovative sandwich plate system which provided a flat surface on which plant equipment could operate and was installed (450t in total) by William Haley Engineering in just over four weeks.

Commenting on its initial project activities Richard Sutton, John Sisk’s Contracts Manager, says: “Our first job was to get the main structural frame erected and organise the delivery of equipment. We wanted the structure, minus the tower, up and clad as quickly as possible.”

Getting materials to a site 250m out in the sea and then assembling it obviously presented a host of unique challenges, which all swayed the decision to use steel. Mr Ridge says: “Steel was the only option for this job because of the location, it’s lighter and more manageable.”

Steel deliveries have all been made via the waist (see box story), but the only viable way of getting equipment on site was by sea. One 180t capacity Kobelco crawler crane and six cherrypickers were all loaded on to a barge at Cardiff Docks and made the short crossing of the Bristol Channel to the site. The cherrypickers have no problem manouevring on the pier’s new deck, but cranes are too heavy and so the Kobelco unit operates via a barge moored off the north side of the pier.  Another 80t crane is moored on the opposite side of the site on a ‘jack-up’ barge which affords it more reach.

explains: “We couldn’t use the cranes when the tide was in and the barges were floating. Working seven days a week, we managed our shifts around the tides as we had plenty of on-site floodlighting to allow work to carry on into the evenings when necessary.” 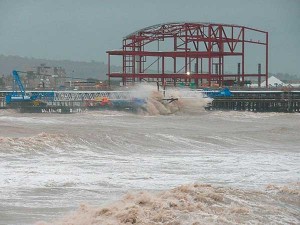 Steel erection followed a regimented east to west sequence, working away from the waist and so allowing all follow-on trades early access to the site. The frame for the new pier pavilion has three spans, 14.5m, 18.5m and 14.5m, which provide the large open spaces for the intended rides and attractions. Cellular beams have been used for all of these spans supporting concrete floor slabs.

Four 20m high architectural towers are positioned in each of the four corners, while the floor plan consists of a ground floor (known as the Great Hall), a level one mezzanine, a second floor which only covers the front third of the structure and will house administrative offices, and a third level for plant.

“The design of the structure incorporates a portal frame running north to south (which is parallel to the beach) with diagonal bracing located east to west,” explains Mr Ridge.

Interestingly the four architectural towers have had to be structurally hung from the first floor mezzanine level. This was necessary because new piles to take the towers columns couldn’t be squeezed into the grid of existing piles.

Covering the pavilion is a curved wave-like steel roof formed with facetted steel beams and supported by a series of 1.5m deep trusses. 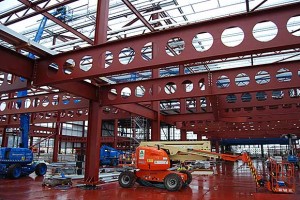 Cellular beams are used to form the neccessary long spans of the Great Hall, while the steel deck allows cherrypickers to work on the pier

Also part of the main pavilion structure and attached to the main frame is another two-storey building known as the pier head. Supported on new piles driven between the refurbished original piles and located at the western end of the pier, this structure will house a function room and cafe as well as providing access to the observation tower.

The first floor of the pier head is formed by a storey deep truss which spans the 15m distance between the piles. Above this a more traditional column and beam formation creates the upper level.

A bridge link will allow access from the pier head to the 90m tall tower. This will be a new independent structure founded on steel piles and a reinforced concrete base frame designed to withstand the very high overturning forces produced by wind and wave action.

The steel frame will be made up of prefabricated elements which will be bolted together on site. This part of the project is scheduled to be completed by summer 2011, while the pavilion is due to open its doors to holiday-makers during this year’s peak season of July. 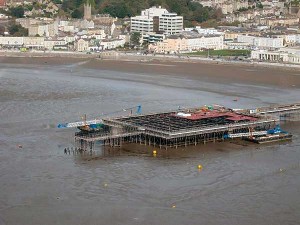 The new deck is installed prior to steelwork erection commencing

One major problem for the team was how to get the steel from the beach head to the end of the pier. Will Haley, General Manager of William Haley Engineering comments: “The heaviest steel piece weighed over 5t and the existing pier waist had a carrying capacity of 2t per axle. We proposed using light bogies separated mechanically so that the load would always be shared between two pier spans. By adopting this method, hundreds of thousands of pounds were saved by avoiding building a parallel causeway on which to run cranes.”Another vital part of the success of the steelwork programme was the fabrication accuracy says Niki Horton, William Haley Engineering Quality Manager. “Our aim was that what went down the pier was right first time. We did two 100% inspections of all steelwork and it succeeded. Out of nearly 3,000 pieces only three pieces needed work on site – and that was drilling holes. That’s pretty good when you consider that the pieces were nearly all different.”