Full steam ahead for Blackfriars revamp 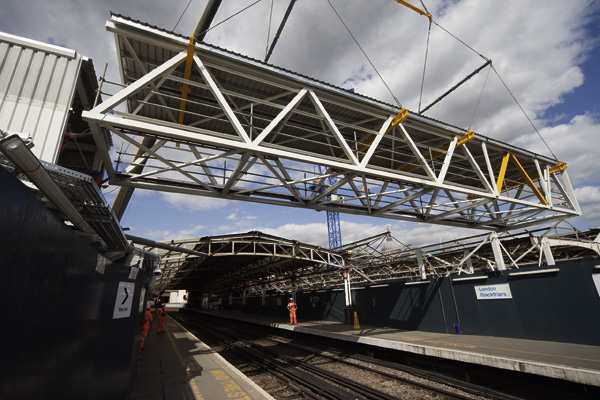 The company, working alongside Balfour Beatty Civil Engineering, has provided temporary access routes into the station and installed a footbridge between platform four and five. Bourne Special Projects will also fit covered walkways inside the station next year.

“As the station is to remain open throughout the project our contract has been to provide temporary works so passengers can be rerouted around the construction site,” explained Ivor Robinson, Bourne’s Project Manager.

The redevelopment of Blackfriars station is part of the £5.5bn congestion-busting Thameslink Programme. The station will be completely redeveloped, with construction taking place on both banks of the River Thames plus extensive work on Blackfriars Rail Bridge.

The new Blackfriars rail station will be the only station in the UK to span a river. It will feature a new station on the South Bank, the first built in this location for over 120 years, and it will give passengers direct access to key local attractions such as the Tate Modern.

Due for completion in early 2012, Blackfriars rail station will be equipped to handle 12 car trains for the first time and significantly more trains will stop at the station every hour. The Underground station will also be considerably enhanced.