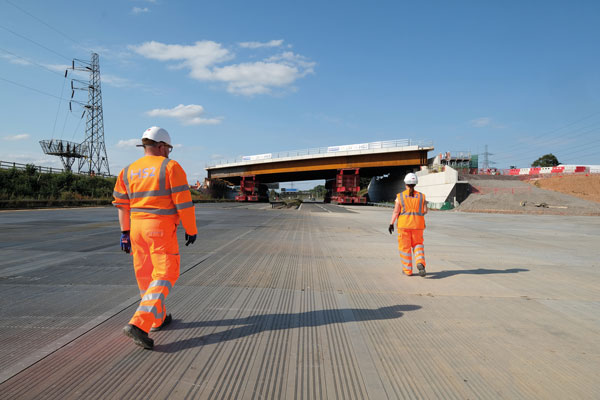 Contractors working on the HS2 railway have installed a 65m-long bridge, spanning the width of the M42, in just two days and ahead of schedule.

The steel composite deck was fully assembled offsite and was carried into position along the motorway on self-propelled modular transporters.

The 448-wheel unit took just one hour and 45 minutes to move the bridge deck 150m, where it was positioned on its abutments to complete the overall bridge structure.

HS2 CEO Mark Thurston, said: “This new road bridge is the first permanent structure to be installed along the route of Britain’s new railway. It represents an important milestone for the project and the West Midlands region – which is already benefiting from thousands of jobs and renewed investment as a result of HS2.

“Constructing the bridge offsite and using innovative engineering practices to install it over the motorway enabled us to carry out the work in just two days, keeping disruption to a minimum.”

Once complete HS2 will bring the West Midlands within an hour’s commute of Manchester, Sheffield, Leeds, York and London, making it one of the most connected parts in the country. HS2 is already transforming the region, spearheading regeneration and economic investment in Birmingham and surrounding towns.