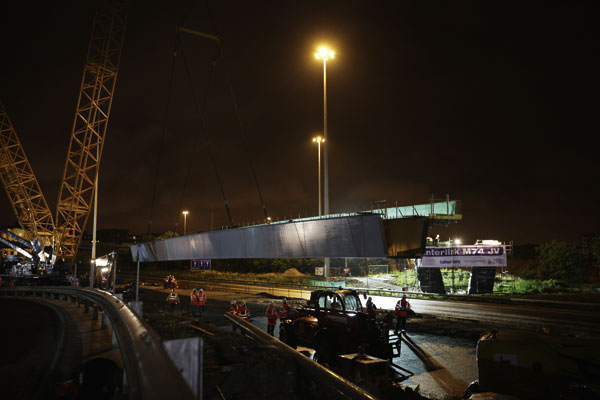 The first of four major steel bridges along the M74 Completion project in Glasgow was lifted into place during August.

Known as the M8 Link Bridge, the 232m long steel composite structure will connect the existing M8’s eastbound carriageways to those of the new M74. Steelwork for the bridge was delivered to site in 20 sections, ranging in size between 16m to 34m long, and weighing between 40t and 70t.

Once on site these fabricated girders were welded together to form eight large girders weighing up to 200t each and 70m long.

The girders were lifted into place, to form the bridge, two each night during four weekend partial and full carriageway closures of the M8. The lifting operation required the use of the UK’s largest mobile crane, a 1,200t capacity Gottwald AK-680.

“We were delighted to reach this important milestone on the project,” said Interlink M74 JV Project Director David Welsh. “The works are already visible and these beams, which will be seen by thousands of motorists each day, emphasise the significant progress being made on this job.”

Over the next year three more steel bridges will be erected along the new five mile stretch of the M74 by steelwork contractor Cleveland Bridge. These consist of the 750m long Port Eglinton Viaduct, the 186m long Rutherglen Station Bridge and the Auchenshuggle Bridge across the River Clyde.