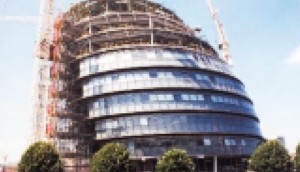 In response to client demands for high quality floors, long column-free spans, speed of construction, together with flexibility and adaptability to meet current and future needs, a number of different floor systems have been developed with a wide range of applications. The aim of this article is to describe some of the more popular forms of floor construction, and to comment on their suitability for certain applications and span ranges. Stephen Hicks reports.

Composite construction is a common structural solution for office floors. It consists of rolled UB or UC sections, acting compositely with an in situ concrete floor slab through stud connectors, which are welded to the top flange of the steel beam; spans of up to 15 m may be readily achieved.

The advantages of this form of construction are that the weight and depth of the steel section can be reduced relative to noncomposite beams (leading to savings in both steel cost and building height); and un-propped construction can be achieved, so floors may be constructed rapidly. 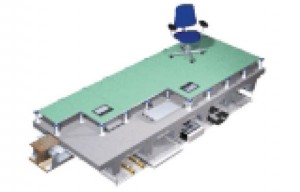 Typically the slab consists of steel decking with a profile height of between 45 to 80 mm, which acts as permanent formwork and, with suitable embossments to ensure bond, provides all or part of the main tension reinforcement by acting compositely with the concrete. Normally spans of between 2.5m and 4.0m may be achieved with overall slab thicknesses of between 120 and 160 mm.

Stud connectors are generally through-deck-welded, although ‘shotfired’ shear connectors may be used on smaller projects. The advantages of using decking are: its speed of construction; it provides a safe working platform, it acts as a safety ‘canopy’; and the decking acts as an effective lateral restraint to the beams in the construction stage, as well as being able to be designed as a diaphragm to redistribute wind loads.

Although not often used in this country, due to concerns of long-term cable corrosion, posttensioned slabs have in the past been used with steel frames in North America and Australia. In this form of construction the slab thickness of conventional composite floors may be reduced, and the spanning capabilities increased, by post-stressing the slabs once the concrete has gained sufficient strength. Stressing is carried out using hand-operated jacks at the edges of the building, with tensioning cables located in pre-formed ducts.

The ducts are then grouted and the jacks moved on. This type of construction has been mainly used in car parks where few service openings, and less stringent rules for vibrations and acoustics are required. Pre-cast hollow core units may also be designed to act compositely with steel beams.

Typically, beam spacings of between 6m to 9m can be readily achieved with, or without, a structural topping. Additional advantages of this form of construction are that both the steel and precast concrete units are a ‘dry’ technology rather than a site-based activity; precast concrete units may be preferred in semi-exposed applications; and shear connectors can be shop-welded before delivery to site (i.e., fewer site operations).

From large-scale fire tests on the eight-storey steel-framed building at BRE Cardington, together with a number of large-scale tests conducted overseas and observations of actual building fires, it has been shown that the performance of real buildings is much better than expected. This is because, traditionally, fire resistance was determined on an elemental basis for isolated members, rather than taking account of whole building interaction. Steel’s inherent ductility enables the reserves of strength in redundant load paths to be mobilised to advantage. From these numerous fire tests, design guidance has been developed (ref. 1), which allows certain beams within a floor system to be left unprotected, while maintaining levels of safety equivalent to traditional methods. In September 2001, largescale fire tests were also carried out on a sevenstorey concrete-framed building at BRE Cardington, it is hoped that these results will soon be published to demonstrate whether comparable performance exists in multi-storey reinforced concrete frames. 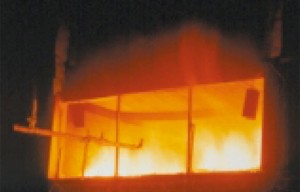 When steel beams are required to be protected, the modern use of steel construction often requires that fire protection materials be applied off-site, in order to reduce the time and disruption due to on-site fire protection operations. Intumescent coatings have been developed which achieve 90 or 120 minutes fire resistance when applied in a single layer in an off-site factory controlled process. This dramatically improves the economy of steel construction where the benefits of speed of construction can be realised. Further guidance on the off-site application of intumescent coatings is given elsewhere (ref. 2).

Due to their reduced weight, an obvious design issue is the dynamic performance of floors from occupant-induced vibrations. From a recently completed three-year study on the performance of office floors, it has been shown that this serviceability concern is not normally an issue. Also, from a recent series of tests, occupant-induced vibrations do not appear to pose a serious problem for sensitive floors (e.g., tests on an operating theatre area gave an in situ response factor four times better than specified by both European and UK recommendations).

When openings are required for the passage of service ducts, large openings may be made within the web of composite beams. As the web contributes more to the shear resistance than the bending resistance of the beam, the optimum location of the opening is in the low shear regions (i.e., within the middle-third of the span for uniformly loaded beams). Openings of up to 70% of the beam depth, with a length to depth aspect ratio of up to 2:1, may be successfully designed. Composite action increases the resistance to local bending due to shear at the openings (Vierendeel bending).

The key feature of Slimfloor construction is that the steel beams are embedded within the slab depth, resulting in an overall structural depth of between 280 to 320 mm. Typically the floor plate consists of either a composite slab using deep decking, or precast concrete hollow core units, which span between the beams.

This type of construction is particularly suitable for square grids. The partial encasement of the steel beams leads to an inherent fire resistance of over 60 minutes, without the need for applied fire protection.

Corus has developed a new type of Slimfloor construction system called Slimdek. This comprises Asymmetric Slimfloor Beams (ASB) supporting an in situ slab on a deep decking known as SD225. ASB are produced in S355 steel and have embossments rolled into their top flange, which enhances the composite action with the concrete encasement without the provision of mechanical shear connectors. As a consequence, longer spans with a reduced slab thickness, compared to traditional composite Slimfloor beams, can be achieved.

The minimum slab depth above the top of the deck is 70 mm for normal weight concrete, and 60 mm for lightweight concrete. The deep composite slabs can achieve un-propped spans of up to 6 m, and up to 9 m when temporary propping is provided during construction.

There are three opportunities for service integration in Slimfloor construction ; the first is partial integration, where the major services are passed below the slab and beams and, when slabs using deep decking are employed, the space between the deck ribs can be used for small pipes and fittings (i.e., lighting units).

When slabs using deep decking are used, full service integration is possible; in this case circular or elongated openings are made in the webs of the Slimfloor beams, to allow for the passage of ducts and pipes located between the ribs to the slab. (As an alternative to this, the space between the decking ribs can act as a duct itself, which again passes through the openings in the beams). The final service requirement is through slab penetrations; for deep deck slabs, services can pass vertically through openings in the concrete topping between the deck ribs (up to a maximum of 400 x 1000 mm). For cases when precast hollow core units are provided, small holes of up to 60 mm diameter may be drilled on site through the hollow cores. Larger holes may be provided subject to manufacturer’s recommendations.

For long spans, a deep beam is often required in order to provide adequate stiffness. In the standard range of rolled sections, flange and web thicknesses increase with beam depth. These sections are often heavier than needed when acting as long-span composite beams. Lighter steel sections can be fabricated from structural sections, or plates to form cellular beams with regular circular openings. Cellular beams are often used where a high degree of flexibility in service routing is required. Spans of up to 25 m may be achieved. 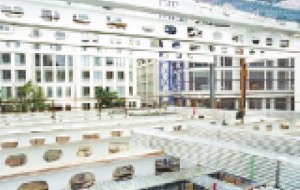 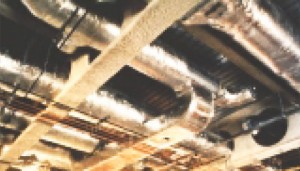 For cases when structural sections are used, such as those produced by Westok, the cellular beam is created by cutting standard sections and re-welding them in a particular pattern to form a deeper beam with regular web openings; the advantages of this technique is that dissimilar section sizes may be welded together to form very efficient asymmetric beams (savings in weight of up to 30% may be achieved).

Alternatively, the cellular beams can be produced by welding plates together (such as those produced by Fabsec); as well as sharing the benefits of cellular beams made with standard sections the obvious advantages of this technique is that tapered or ‘tailor-made’ beams may be provided; and the fire resistant design can be optimised with respect to normal design. Also, beams with different cell diameters (and/or rectangular openings) and wider web posts (which are often needed in zones of high shear) may be produced.

Long-span beams permit full service integration, as it is possible to pass the services through the beams at pre-determined locations, so that the structure and services occupy the same horizontal zone. As well as recognising the inherent benefits offered by steel construction a recent SCI publication examined the broad benefits of long-span construction, taking account of: savings in cladding cost when service integration is properly addressed (so that the floor-to-floor height is reduced); reduction in the number and total weight of the steel columns together with their foundations; greater usable space, due to fewer (or no) internal columns; and fewer steel elements, leading to faster speed of erection of the primary structure.

From this study, it was concluded that the cost increase in using longspan construction is rarely more than 2% of the total building cost, and costs are comparable to more conventional short span construction when other savings are taken into account.

Recent research figures show that steel is the preferred framing material for about 80% of all industrial and commercial buildings in the UK. Steel construction is produced efficiently and waste is minimised and recycled (all steel is potentially re-usable). The above structural systems are just some of the many solutions that may be used in the industrial, commercial and public sector.

Stephen Hicks, is a Principal Engineer at The Steel Construction Institute.