From Building with Steel, November 1961

After what seemed to many as interminable delays a road programme designed to speed up the ever swelling volume of traffic on the country’s roads, is now in active operation. It is natural that some people should chafe at what might appear to be dilatory methods, but a look at a map of England showing a small grossly overpopulated island bursting at the seams in every direction illustrates to the dispassionate observer the many impediments on the way to progress.

The M1 Motorway has up to now (1961) received the major part of the publicity devoted to this programme but other parts of the country have been making their individual contributions. Many have been spectacular in conception and operation and bridge building of many kinds has inevitably played a prominent part.

The Preston By-Pass is one case in point. The By-Pass was begun in 1956-57 some twenty years after the suggestion was originally mooted. The line of the By-Pass was sited so as to fulfil its primary function as part of the North-South Motorway: its total length is 8.26 miles.

The two major bridges built over or under the Preston By-Pass were of steel construction. These were (1) Salmesbury, over the River Ribble and Trunk Road A59 – a three span continuous steel girder bridge of spans 120ft. 180 ft. and 120 ft., giving a total length of 420 ft. between abutments; and (2) Higher-Walton over the River Darwen and County Road A675, a multi-span continuous steel girder bridge carried on concrete trestles with four major spans of 97 ft. 6 in, each and two end spans of 42 ft. 9 in., an overall length of 474 ft.

A large number of citizens, jealous of the beauties of the English countryside and resolved to retain them in spite of the onrush of modern conditions, display a natural anxiety when motorways are cut through the land. These individuals owe a debt of gratitude to the builders of the Preston By-Pass. That it is a motorway no-one can deny but it is mellowing into a delightful countryside with no sense of intrusion at all: a notable achievement.

On 21 March 1961 the Stretford-Eccles By-Pass was officially opened by Alderman Sir Andrew Smith, C.B.E., J.P., Chairman of the Lancashire County Council. This forms part of the Manchester Outer Ring Road and was the third section of Motorway to be opened in Lancashire and the first classified road in Great Britain to have the status of a Motorway: it is 5.95 miles long.

The principal engineering feature of the By-Pass is the Barton High Level Bridge which crosses the Manchester Ship Canal. The bridge is 2,425 ft. long, rising to a height of some 100 ft. above water level over the Manchester Ship Canal, with a maximum gradient of 1 in 25: it is on horizontal curves of 2,604 ft radius (South) and 2,865 ft. (North). 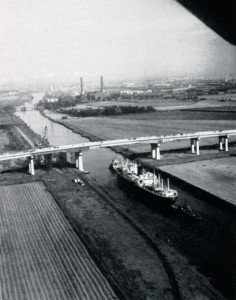 The bridge deck is in two halves and consists of a 9 in. thick reinforced concrete slab supported on eight steel girders of riveted construction, i.e. four under each carriageway at 9 ft. centres. The depth of the approach span girder is 9 ft. and the girders over the Ship Canal vary from 9 ft. in the centre to 18 ft. over the piers in depth. Composite action between the steel girders and the concrete deck by the use of shear connectors resulted in economy in steel and reduced flexure of girders.

Since the Ship Canal is in use both day and night the centre span girders on the western half of the bridge were launched from deck level by means of Bailey Bridge nosing and winched forward together with the deck, shuttered for concreting. The girder on the eastern half were moved onto the completed western half of the suspended span on rail tracks and lifted individually into position by cranes situated at the tips of the cantilever spans.

The design of the Barton High Level Bridge received the approval of the Royal Fine Arts Commission. It was imperative that the design be pleasing as the bridge is the dominant feature of the landscape.

Gathurst Viaduct. Part of the Birmingham-Preston Motorway, it stretches almost a quarter of a mile across a road, a river, a canal and a main railway line

Work is proceeding on the Lancashire section of the motorway from Dunston in Staffordshire to the Preston By-Pass, it being scheduled for completion in 1963.

Gathurst Viaduct is a spectacular steel structure 800 ft. long, some three miles west of Wigan. This will be completed by the end of 1961. The last steel member having been put in position in August.

The viaduct consists of four spans of 150 ft. and two end spans of 100 ft. The width is 108 ft. between parapets and the weight of constructional steelwork 2,200 tons.

An occupation road, the River Douglas, the Leeds-Liverpool Canal and the main railway line between Wigan and Southport are crossed by the Viaduct which is over 80ft above ground level in the centre, and these physical conditions produced an extremely difficult erection problem. After various methods had been considered it was decided to adopt the most unusual procedure of pushing the girders out in pairs suitably braced together so that they cantilevered out from one pier to the next running on specially designed ball bearings.

Broadly speaking, the viaduct consists of ten continuous plate girders 10 ft. deep with 21 in. wide flanges, in N.D.I. Steel. These are of welded construction and involved rigid inspection including X-ray of joints before they left the works. The largest pieces were 93 ft. long and weighed 24 tons each and all the steelwork was shot-blasted and painted before being sent to site. 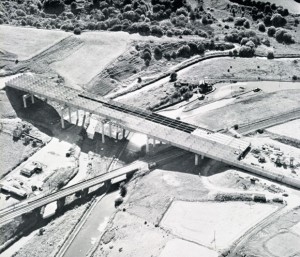 Construction work on the Gathurst Viaduct

In view of the flexibility of these large girders, they were sent to site in pairs braced together. On site they were driven under a pair of overhead gantries for off-loading and were placed on a 400 ft. long launching track. After the permanent bracing had been fitted, further pairs of girders were brought to site and joints were made with tuned and fitted bolts.

When sufficient girders were assembled to provide counterweight for cantilevering over the first 100 ft. span, the assembly was attached to a light prefabricated nose 110 ft. long and the first launch was carried out. Further girders were then brought to site, jointed and pushed out over successive piers. When the full length had been assembled the complete girders weighing 450 tons were moved into their final position at a speed of approximately 12 in. a minute.

At this stage the nose was dismantled, brought back to the other side of the bridge and re-built in the launching track which had been moved over to match with the second pair of girders. While this was being done, jacking down to the permanent bearings was carried out and then the whole procedure was repeated for each of the remaining four pairs of girders.

The launching procedure was complicated by the precautions needed to preserve safety on the railway. The first steelwork was delivered to site late in October 1960 and the greater proportion of the work has had to be carried out in the winter months. Also in the early stages, as might be expected in a project as complex and unusual as this, a number of minor snags had to be overcome both in the works and on site.

Notwithstanding these difficulties, however, the last pair of girders was put into final position three weeks ahead of the original programme date.