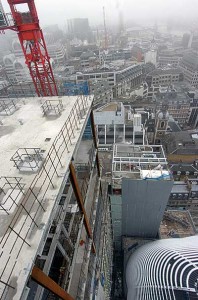 A new headquarters building for Rothschild merchant bank is currently under construction in the City of London.

Situated opposite the bank’s current premises on St Swithin’s Lane – which it has occupied since the early 19th Century – the 16-storey steel framed structure is being constructed by Bovis Lend Lease.

Steelwork contractor for the project is Rowen Structures and it has erected 1,900t of steel for the job, along with a further 300t of Corus Bi-steel.

The building contains two Bi-steel structures, one core beginning at level 11 and extending up to the top floor, and another larger L-shaped shear wall which starts at lower ground floor and goes up to level 10.

Other notable features of the project include a double-height lobby which will be fully glazed along two elevations affording views of the adjacent St Stephen Walbrook Church.

To help create a large open plan lobby a major transfer structure has been erected along one elevation. This 4m deep truss supports 15-storeys of the building along one grid line.

“Because of its size the truss had to be brought to site in 12 sections,” explained Andrew Henstock, Rowen Structures’ Project Manager. “The top boom in three sections, the bottom boom in one piece and eight diagonals.”