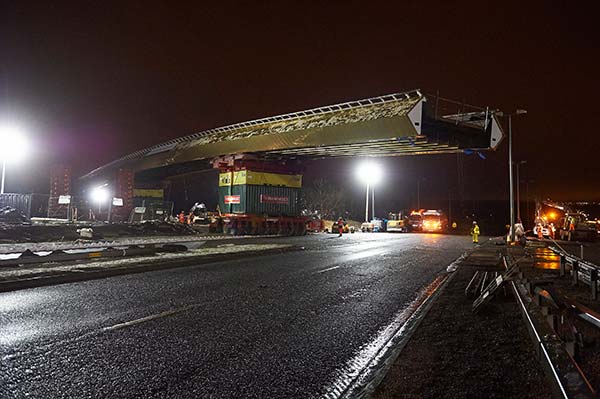 A new 84m long pedestrian and cycle bridge has been installed across the A9 linking Inverness city centre with the 215 acre Inverness Campus development.

Highlands and Islands Enterprises’ multi million Campus development will include new colleges, a primary care centre and a hotel. Work on these buildings is scheduled to begin as soon as Morgan Sindall has completed the bridge, and other infrastructure works.

The steel bridge was fabricated and assembled by Cleveland Bridge. It is 9m wide, weighs 290t and was brought to site as six main girders, two 36m long and four 24m long ‘sections.

“We assembled the bridge on 2m high stillages on an adjacent site,” said Paul Walmsley, Cleveland Bridge Project Manager. “We welded the girders and crossbeams, as well as installed the metal deck.”

Once the bridge was assembled and clad, Morgan Sindall and heavy lift specialist Mammoet installed the bridge during a single night time road closure. The bridge structure was jacked up and transported to its permanent position by self propelled mobile transporters (SPMTs). Once in position it was lowered onto its permanent bearings.

Commenting on the installation, Neil Duncan, Area Director at Morgan Sindall, said: “Good transport and pedestrian infrastructure is vital in a large scale project such as Inverness Campus, so we are pleased to have put in place this crucial piece in the development.”