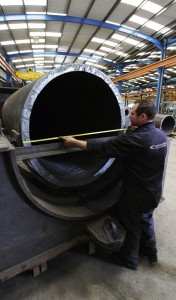 Barnshaws Steel Bending has completed the curving of what are believed to be some of the largest tubes ever cold bent anywhere in the world.

The project involved bending 16 tubes which varied in length from 8m up to 12.5m-long, with the heaviest piece weighing close to 28t. The 1,300mm diameter × 70mm thick tubes were all curved for the construction of an outdoor arena.

Once on site, the tubes were assembled into two arches to form the arena’s roof. They all needed to be curved to a radius of 49.7m, but with an elastic modulus of 79,000m³, they each required enormous forces to bend them into shape.

“Previous options of constructing arched structures such as these were limited to induction bending or producing the curve with a series of facets, which is not architecturally appealing,” said Greg North Barnshaws Commercial Director.

“This is the biggest cold bend we’ve ever done.”

Barnshaws completed the production schedule for all 16 tubes in 14 weeks.