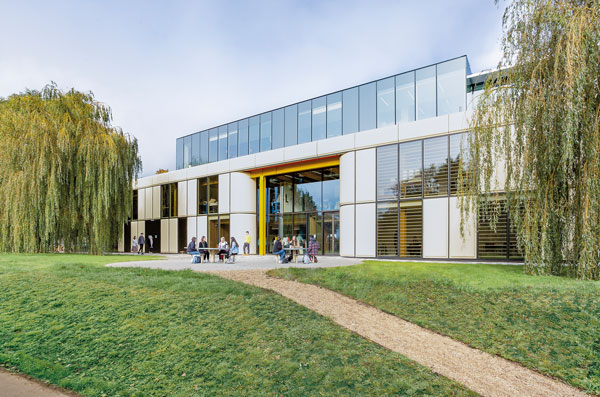 A retained steel frame has been combined with new steel elements to create a modern educational facility.

According to Grimshaw Architects, the key ambition of the project’s design was to retain as much of the existing steel-framed building as possible.

To this end, the steel façade frame has been kept as it supports a flexible modular system of glazed and solid panels, as well the primary structure of continuous secondary roof beams that create 20m-long internal spans.

Beyond the challenges of retaining and refurbishing the existing frame, a new steel structure raises the roof by 1m, supports a new roof deck for extensive plant equipment, supports a rooftop extension above the existing building and encloses two wings of flexible workshops and studios, as well as providing a substantial new mezzanine level. 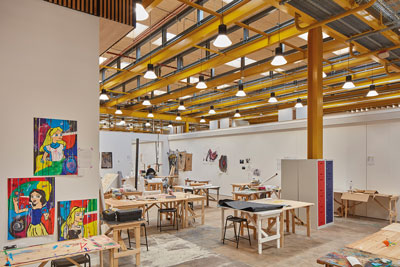 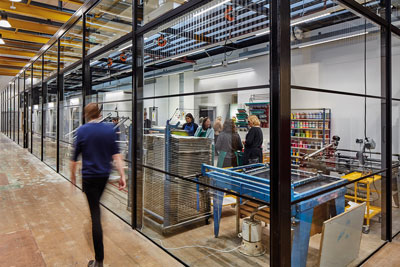 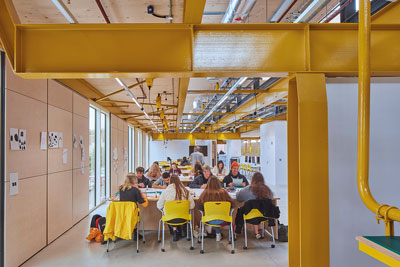 “The conversion integrates a new steel structure, building upon this structural design aesthetic and principles of flexible workspace.

“The use of steel delivered the large uninterrupted flexible volumes which allow for its adaption over time. It also provides the aesthetic for the building at a number of scales from the structural frame and expressive structural connections right down to the steel brackets which support the services, lighting, signage and furniture.”

Willmott Dixon Senior Building Manager Martin Dando agrees and adds: “The existing steel frame was listed for its architectural importance. The key challenge was erecting new steel frames within the existing steel to create the new facility without compromising the structural integrity or the original design philosophy.

“The compatibility of old and new was the driver for this. The new steel frames interact with the existing. Other types of superstructure could not achieve the same harmony the new steel provides.”

The project’s unique design has also become a mandate to teach differently. In the past, teaching practices adapted to suit the building, but this building informs teaching in a different way putting flexible creative enterprise at its heart.

To facilitate this, the new steel roof is raised by Vierendeel steel trusses, allowing a flexible network of ‘plug & play’ services to run at high level. This allows the spaces below to be reconfigured as required. The modular façade system also allows the elevation to be easily reconfigured to respond to changing internal requirements.

The mezzanine floor beams have additional web openings to allow for future servicing and both the mezzanine and rooftop pavilion are designed to allow the internal layout to be reconfigured to suit future needs. All structures are framed to be independent of the existing to allow for future removal or adaption without detriment to the original.

Within the building, reflective areas encourage students to indulge in discourse outside of their usual disciplines. Communal open spaces encourage ‘bumping into’ of staff, students, professionals and visitors, providing unknown opportunities. While professionalised spaces such as the gallery, art shop, rooftop, a publicly accessible café and riverside landscape, are designed to actively engage enterprise activities and the local community.

With an emphasis on what the University calls ‘thinking through making’ the students and their creative practice are placed central to the design of the new campus. The design located the immense workshop facilities in the centre of the building to enable focused support from specialist technicians, and the ability for students to move seamlessly between materials and processes, whilst then allowing the mezzanine to be open and highly flexible.

The new raised roof structure spans above the existing beams, moving the load of the roof closer to the columns. This maximised the capacity of the existing structure so the roof could support increased insulation, PV’s and rooflights.

The new Vierendeel trusses were fabricated offsite in two parts, and craned into position, before being bolted together. The majority of the structural steel relies on bolted connections, with long term benefits to deconstruction, and protecting the integrity of the existing listed structure.

To this end the new rooftop extension is supported on steel columns and cantilevered trusses that thread between the existing steel beams, as an independent structure, with half the columns making use of existing pad foundations that were provided to allow for a future extension. The new rooftop plant deck structure also follows this same ethos.

More than retaining significant embodied carbon within the building, a key outcome for the project was to ensure that the energy performance was brought up to modern standards and beyond, safeguarding its long-term future.

The entire envelope was upgraded to provide dramatically improved thermal performance through new double glazing, additional insulation and much improved air-tightness. The new roof provides over 100 rooflights, reducing the reliance on artificial daylighting, and PV’s providing over 10% of the building’s energy consumption.

In summary, the judges say this project involved a major re-purposing of a Grade II-listed industrial building, thus validating key concepts of the original 1970s design – adaptability and sustainability. Structural additions were separated from the existing, requiring careful installation and the façade sensitively upgraded to improve performance. The result is a building of exceptional quality ideally suited to its new use.