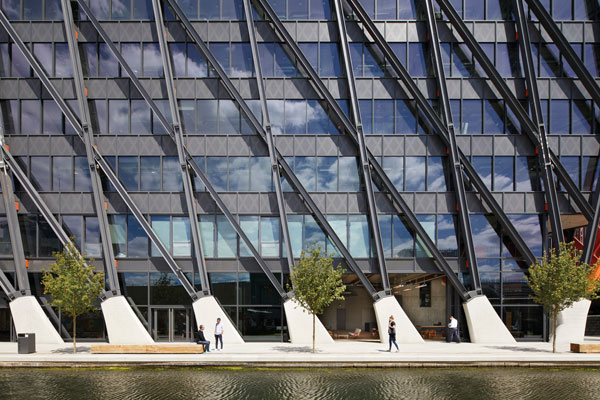 Exposed steelwork has created a stand-out commercial building in Paddington named in honour of a famous engineer.

The architectural brief was to create a landmark building which provided high-quality, innovative, people-centred workspace and which would re-engage the site with the canal.

Within the structure, services are exposed to maximise flexibility and workspace volume. This logic is continued externally with an exoskeleton positioned outside the façade.

The exoskeleton structure extends beyond roof level to create glazed, wind-sheltered gardens on the 15th and 17th floor levels. It also shades the large expanses of glazing, affording scenic panoramic views across the west London skyline. 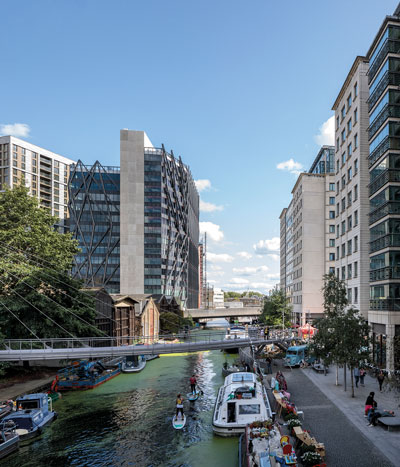 This approach brought many benefits to the building, including tall, open column-free workspaces, 25 per cent solar shading and a dynamic appearance. This celebration of steelwork is said to extend to the artwork commissioned for the building, most notably James Capper’s maritime-inspired steel ‘Tread Pads’ which are suspended above the reception by slender Macalloy rods.

Despite the bespoke nature of the building, a regular 6m floor beam spacing was used with precast lattice slabs set down into the web zone of the supporting steel plate girders. The services and structure are seamlessly integrated, thus enabling a more efficient use of the available structural depth and maximising floor-to-ceiling heights.

A semi-unitised curtain-wall cladding system with an insulated strong-back system provided a considerable amount of repetition together with flexibility where required.

The building’s adaptability and high architectural quality should also allow the structural design life to be met and exceeded. A detailed whole-life carbon assessment of operational energy and embodied carbon associated with construction was conducted. It forecast a 71 per cent operational energy improvement over a typical Econ19 office fit-out and a 7.5 per cent reduction against a typical UK new-build CAT A office building.

For the steelwork design, floor beams span directly from core wall out to the exoskeleton. One consequence of this is that the location of the floor beams on each level varies so to meet the exoskeleton support. This means that beam location varies slightly on each floor and thus beam spans and service opening locations also vary on each floor. The project team used digital workflows to optimise and communicate plate thicknesses, weld sizes, connection designs, pre-cambers, movements, and fabrication and installation information.

For example, close collaboration between all parties allowed the various stiffness factors, tolerances and construction sequence impacts to be considered and individual pre-camber values agreed for each beam in the building.

This also provided a challenge for the contractor & MEP sub-contractors which they solved, in part, by projecting the MEP sub-contractor information onto the relevant ceilings while the operatives installed the required equipment and service runs.

This notch was unstiffened at the request of the architect, and justified using plastic design – including non-linear finite element modelling. The beams meet the external structure with a thermally broken connection encased in an insulated stub collar, which is removable to allow for future inspections.

All in all, the exoskeleton defines the character of the building, as it is a visual focal point, and contributes to the external shading, with the inclined columns and braces carrying the gravity loads at the perimeter of the building and bridging over constraints below ground level.

The project team say the realised project could only have been achieved with a steel frame. It allowed long spans and integral MEP service runs to be achieved. The exoskeleton and floor beams are plate girders and thus a high level of optimisation could be achieved by varying individual plate thicknesses and beam pre-cambers while still maintaining the same design intent. Visible, legible connections could be achieved in steelwork which formed part of the design aesthetic of the project.

In summary, the judges say this project shows how a proactive client working with a talented team can produce a commercial office building of the highest integrity.

Expressed structural steelwork in the external frame and floor structures is dramatic and dynamic; all is detailed with great care and attention. A roof garden overlooking Paddington station and the canal basin provide a welcome extension to the public domain.