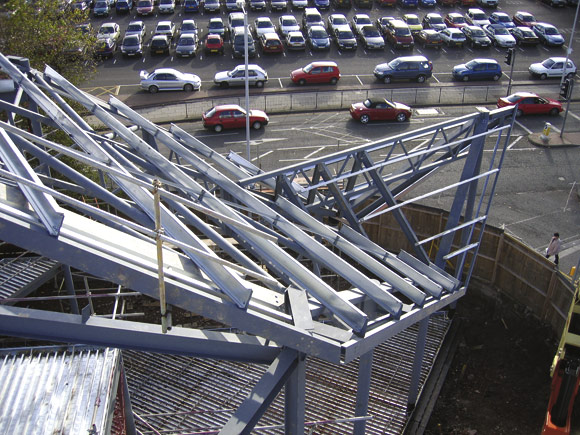 Virtual walkthrough software proved to be an essential tool in the detailing and fabrication of steelwork for the striking atrium at Birkenhead’s new community based Lauries Centre. Paul Wheeler reports.

North Wales based EvadX erected and fabricated all the structural steelwork on the new £3M Lauries Centre, which is taking shape in Birkenhead.

Visualising and detailing the Wirral community centre’s atrium provided a few headaches for the design team — or would have done had 3D software not been available.

The Wirral Council funded centre will provide office space for up to eleven community-based organisations, a conference and function hall and a community café. EvadX’s £350,000 structural steelwork order includes just under 250t of hot rolled steel and a further 10t of cold rolled secondary steels.

The centre is designed to be environmentally efficient and sustainable, in that it includes self-cleaning windows, solar power and boasts high energy efficiency. 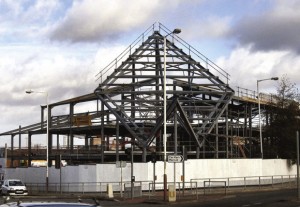 The atrium’s frame measures 27m from tip to tip and 14.5m across, and at its highest point is 18.5m from the ground. The pitch of the atrium’s roof varies from 33° for the main section to 58° for the smaller frame which intersects the main roof of the atrium.

Structurally the atrium works like a cross, says EvadX’s Drawing Office Manager Andrew Roberts, and the challenge is all in the shape. It is made up from three trusses, fabricated and assembled at EvadX’s Kinmel Bay facility in Rhyl, transported to site and then bolted together.

As EvadX Managing Director Simon Adams says: “If you were to take out the atrium, the building would be a standard, basic frame. But the atrium was both difficult to detail and make.”

The company was unquestionably assisted in this task through the use of the latest version of AceCAD’s StruCAD design software, which in version 10 includes a walkthrough graphics facility.

“The atrium is so unusual that is was initially difficulty to translate the architect’s ideas into workable structural designs,” says Roberts. “But through StruWalker, we were able to create a walk through the atrium, showing the connection points and developing the design. Without the software, this would have been very difficult.”

Andy Dickinson, Project Engineer with structural engineer Williams Jones & Partners goes further: “Because you’ve got orthogonal converging angles it was very useful to see it in three dimensions. It meant we could talk through and modify the designs on screen and in one case this identified that the two-dimensional plans did not quite fit in. Without StruCAD it would have been a nightmare to visualise and we would have spent a long time agonising over the detailing.”

The proof of the pudding is in the eating, so it was a great relief that once on site the atrium was erected without drama. As Adams points out: “With tolerances of just millimetres, there was nothing to play with.”

In fact the design and fabrication of the Lauries Centre atrium proved so unusual that EvadX has submitted its model to StruCAD developer AceCAD’s annual international design competition.