It is now over ten years since the revised edition of P300 was published by SCI. This work, in collaboration with the Metal Cladding and Roofing Manufacturers’ Association (MCRMA), covered best practice for the design and construction of composite beams and slabs. It benefitted from considerable practitioner input from the members of the MCRMA’s now disbanded Decking Group, remains widely referenced and is mostly still applicable.

One perennial problem with anything composite is that other aspects of a building, such as the need to accommodate services, often result in an inconvenient desire to cut holes in structural concrete (and composite) slabs. In P300 we collated what individual decking manufacturers were saying in their literature in order to provide guidance on how to deal, structurally, with small, medium and large openings:

Two aspects of this guidance are worthy of further consideration, namely what is the critical dimension, and how to deal with openings which are placed close together. 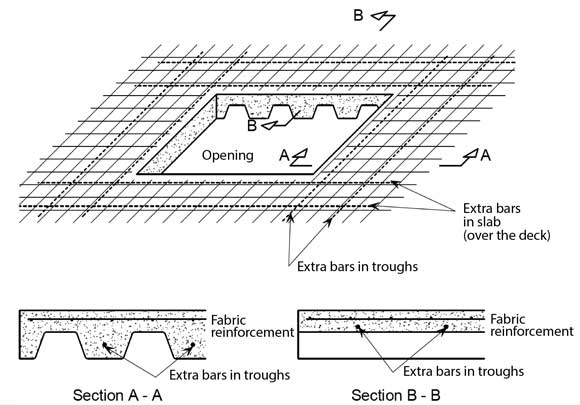 The critical dimension of an opening
Although the guidance given in P300 refers to square openings, the dimensional limits actually need only apply to the width of the opening (perpendicular to the direction of span of the slab). This is because they are based on the ability of the slab, without additional measures for small openings and with additional measures for anything larger, to transfer self-weight and loads transversally between ribs. A small opening could be over one metre long, so long as it wasn’t more than 300 mm wide.

It is also worth adding that although 300 mm is provided as general guidance, for the unusual (in the UK) case of a slab with extra bars in the troughs, their positioning relative to the opening needs to be considered. A 300 mm wide opening could very easily ‘interrupt’ a bar in a trough. Such interruption would need to be compensated for by placing additional longitudinal bars in the adjacent troughs using the beam-strip model adopted for medium-sized openings.

For medium-sized openings it is also worth remembering that some of the reinforcement in the beam-strips will be relatively susceptible to fire. Bars in troughs may have sufficient concrete cover to keep them cool, but bars (and fabric) in the slab between the ribs will become hot and loose considerable strength. Fire protection may be needed to ensure that the beam-strips retain their integrity in a fire.

Multiple openings
In some situations with multiple small or medium-sized openings it will not be possible to accommodate beam-strips between adjacent openings (with or without supplementary reinforcement) to carry the additional loads around the opening. They should then be treated as one (larger) effective opening. Beam-strips are designed using the same philosophy around, and potentially within (to pick up any local areas of otherwise unsupported slab), this larger area.

Health and safety and site practice
The above considerations only concern the structural ability of the slab. Of course, attention must be paid to some form of protection when there is any kind of opening, to avoid a potential hazard on site.

And finally, as noted in P300, small and medium-sized holes in the deck should not be cut until after the concrete around the opening has cured.